During the restorations at the St Nicholas’ church in Kilcorney, there was an appeal to the parish to donate stained glass windows to the church. At that time there were only bare PVC windows in the building. The response was great and in January we fitted the 7th set of panels. Integrated in the first 4 windows are over 100-years old stained glass panels, depicting 8 Saints.
We would like to thank the Kilcorney parish and the donors for the opportunity to create these windows. The parish is still looking to fill 2 large windows and 1 small one in the church. If you are interested in donating, please contact us or Fr. Winter in Banteer.
Thank you and stay safe – Ildánach Stained Glass Studio 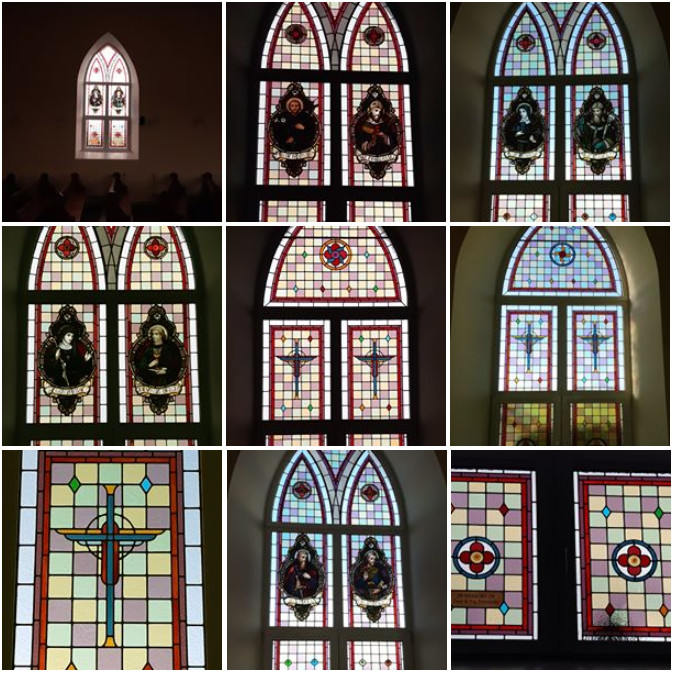 Below are some of the beautiful Stained Glass Windows in the old chapel in Drishane. The chapel was build while the Sisters of the Infant Jesus were in Drishane from 1909 until 1992. 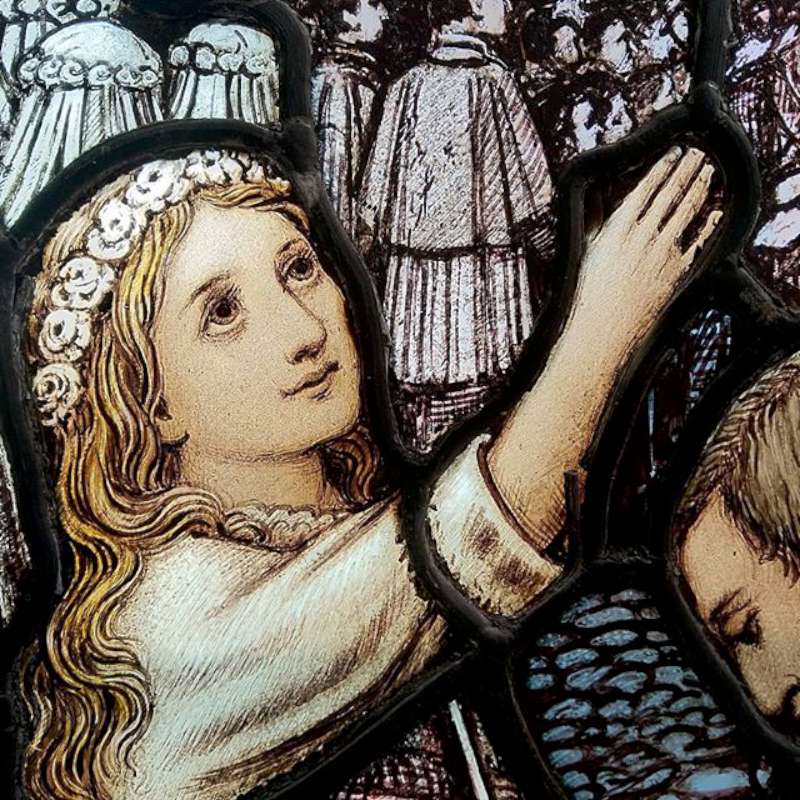 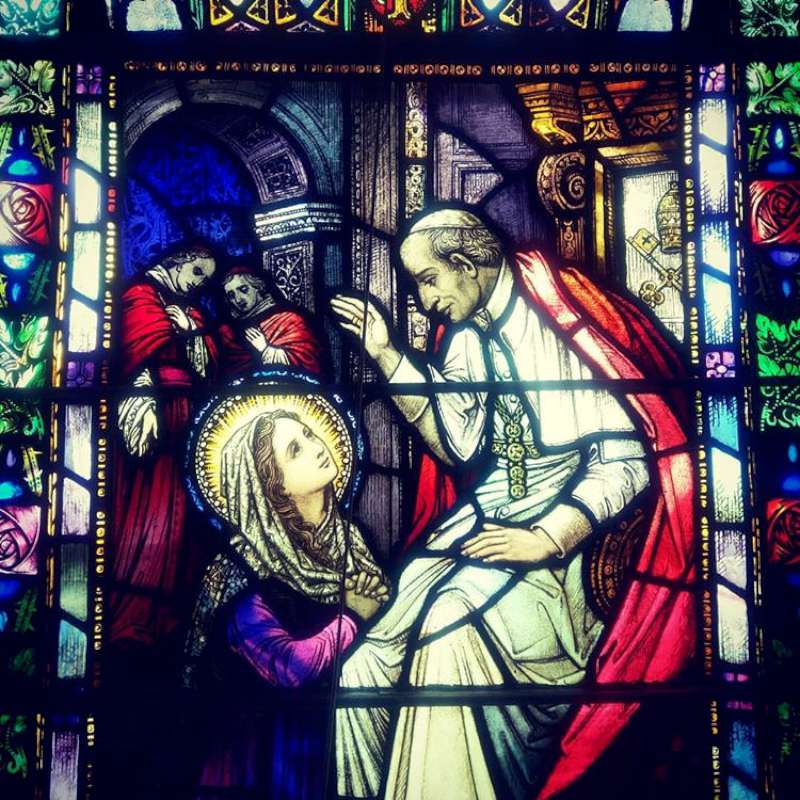 END_OF_DOCUMENT_TOKEN_TO_BE_REPLACED

What a truly wonderful response we’re received regarding our query just posted on our website last night!  And we are so very grateful to Jerry Sheehan of Los Angeles, California, USA who has identified the Saints on both windows of St. Patrick’s Church, Millstreet.  The letters SC and SD provide an important clue – the “S” on all the windows symbolises the word “Saint”.  Jerry now reveals that the Saint on the large window at the back of the Choir Gallery is Saint Margaret Mary Alacoque.  And the Saint on the other window is Saint Charles Borremo while the Saint depicted in the smaller frame of the same window is Saint Dominic.  Thanks a million, Jerry, for so very promptly contacting our Millstreet Museum email address with such highly significant information.  (S.R.)

We have recently been asked by a number of people a query regarding two of our beautiful windows in St. Patrick’s Church, Millstreet.  Below we illustrate both windows.  The first one has the SC indication and SD in the lower image on the same window.   We welcome your suggestions re the identity of these Saints.    The second window is the very large one behind where the Choir used to sing in the Church Gallery.   Who is the Saint praying to the Lord?  We would be very grateful of any assistance in these queries.  Please use our Comment facility here or email millstreetmuseum @eircom.net …. Saints in most of the magnificent stained glass windows have been identified but these two windows are still the subject of research regarding the identity of the Saints depicted on the windows. Click on the images to enlarge. (S.R.) 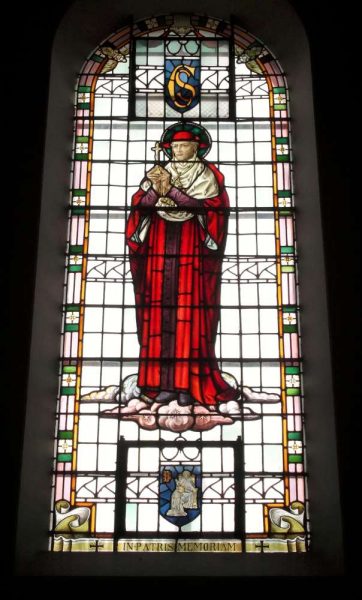 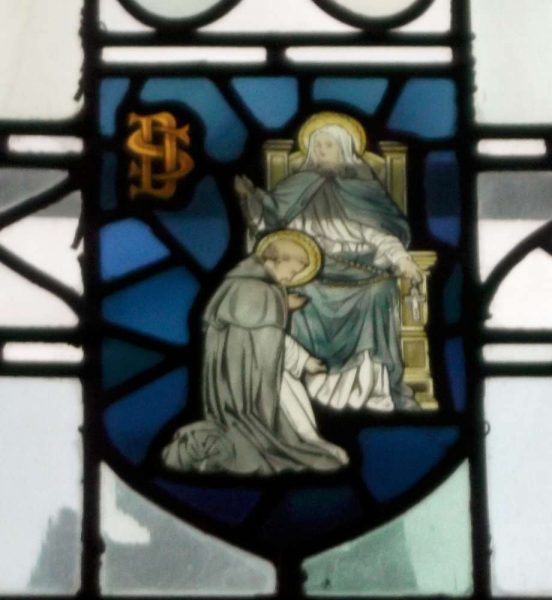 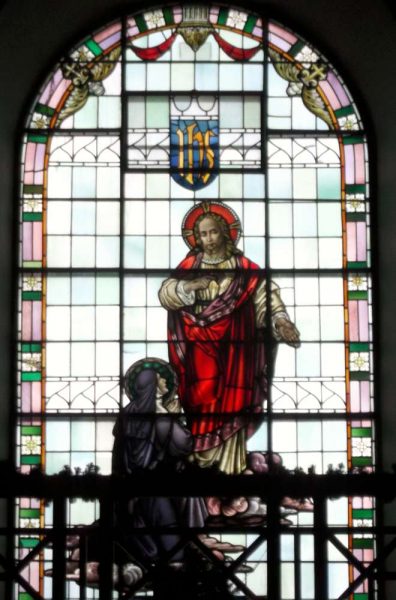 The answer was provided in a later post, but is included below for clarity:

“What a truly wonderful response we’re received regarding our query just posted on our website last night!  And we are so very grateful to Jerry Sheehan of Los Angeles, California, USA who has identified the Saints on both windows of St. Patrick’s Church, Millstreet.  The letters SC and SD provide an important clue – the “S” on all the windows symbolises the word “Saint”.  Jerry now reveals that the Saint on the large window at the back of the Choir Gallery is Saint Margaret Mary Alacoque.  And the Saint on the other window is Saint Charles Borremo while the Saint depicted in the smaller frame of the same window is Saint Dominic.  Thanks a million, Jerry, for so very promptly contacting our Millstreet Museum email address with such highly significant information.  (S.R.)” [1]

“One of this year’s three Irish CHRISTMAS STAMPS is a photograph that I was commissioned to take in May by An Post. I won’t have the END_OF_DOCUMENT_TOKEN_TO_BE_REPLACED 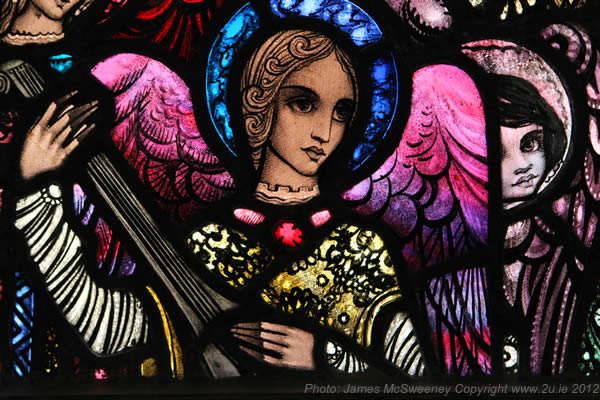 The above photo is from Fr James McSweeney’s website 2u.ie. It is a close-up of  a small part of the “Adoration of the Magi” stained glass window in St.Patrick’s Church Millstreet. It is by Ireland’s most famous Stained Glass Window maker – Harry Clarke. The colour and detail are fantastic when you realise what you see above is only a small corner of the full window [see a photo of the full window below]. Fr James has a thought for every day and today it is about the Saints:

Today is All Saints Day and it always falls on November 1st, to coincide with Halloween. As Halloween has pagan roots, an attempt was made to make spiritual all the events that surround it. This is where All Saints Day comes in today. On the spiritual calendar it is indeed a special day. It would be a mistake to think today is about famous or celebrity Saints. Today is all about our own loved ones gone on before us who lived decent, honest, simple and down to earth lives. They may not have been famous, they may not have END_OF_DOCUMENT_TOKEN_TO_BE_REPLACED 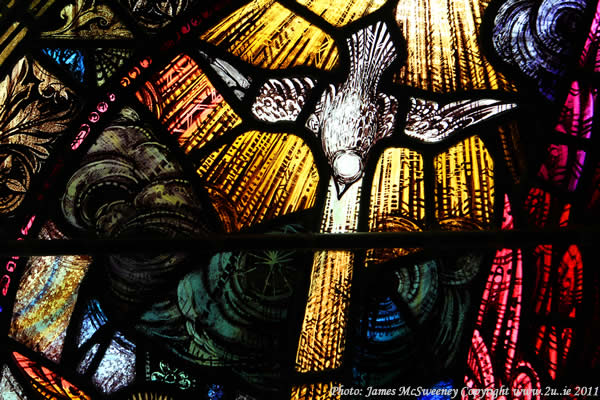 Read the full article with his thought for the day on his website 2u.ie 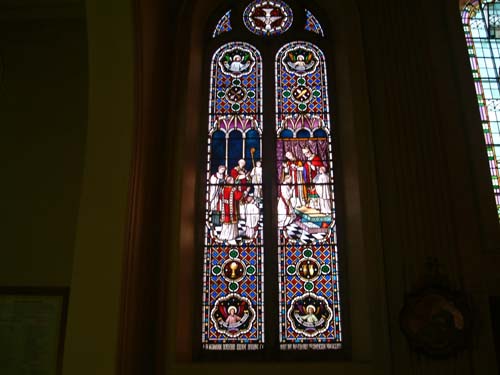 This window was in the old church. It consists of two sections which coalesce to form one scene – the Ordination of a priest. The window is in remembrance of Rev. Jerome Harding who died on 16 Nov. 1876, aged only 28 years. He was curate in Cahirciveen but his people were from Millstreet. His remains were brought to Millstreet for burial and it was a massive funeral. The inscription at the foot of the window reads: “in memoriam reverendi jeremiae harding: obiit die novembris decimasexta mdccclxxvi” (“In memory of Rev. Jerome Harding; he died 16th Nov. 1876”). END_OF_DOCUMENT_TOKEN_TO_BE_REPLACED 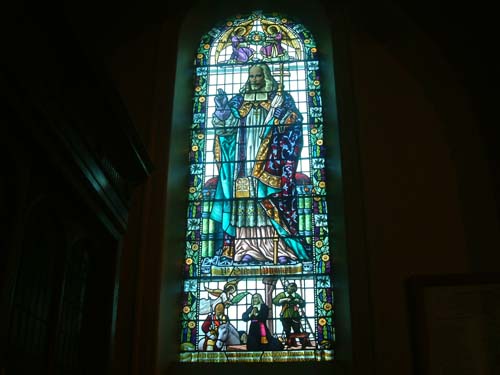