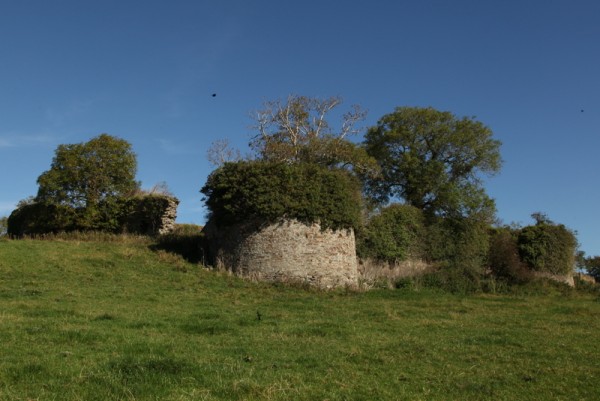 Dromsicane (Drom Seacán): The Ridge of the Seat (Big House)

Dromsicane is often described as having been a castle of the O’Keeffes, and indeed it appears to have been in O’Keeffe territory. It certainly was in the hands of the MacDonogh MacCarthys by the start of the seventeenth century, as an inquisition into the lands of Donogh McCormack (MacDonogh) on 14 August 1604 indicates; wherein it stated that “he was seized of the Castles of Lohort, Kanturk and Dromsicane when he was killed in rebellion on 4 August 1600.  He took legal action in 1592 against some of the MacCarthys of Drishane who had taken over Dromsicane and other townlands.

When the Papal Nuncio, Rinnucini came to Ireland in 1645 on his way to the Confederation of Kilkenny, and having passed four days of Macroom, he went on to Dromsicane to the residence of Dermot MacCarthy.  He was accompanied by the Bishop of Ardfert and Bishop Beothus MacEgan, who shortly would meet his ghastly end outside the Castle of Carrigadrohid (q.v.). Donogh MacCarthy was then a widower, and Donogh his son was married to a daughter of the Lord of Muskerry.  Richard Butler, brother of Lord Ormond – to whom the Nuncio’s visit would be disastrous – was also present with two troops of horse.

When the land was lost to the MacCarthys it fell into the hands of Sir Nicholas Chinnery.

Dromsicane consisted of a large walled quadrangle with a substantial rounded tower at each corner, enclosing a bawn in which there was a tall keep.  The central keep has been gone for a matter of a couple of centuries, having been demolished in Smith’s day, but substantial remains of the towers and bawn wall existed until recently. 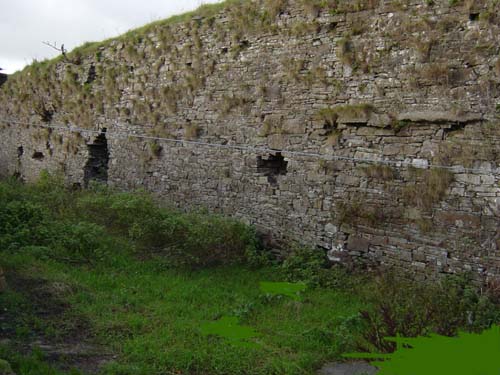 “Droumiscane Castle is a rectangular fortification, formerly the property of the O Keeffe’s. Length, 41 yards; Breath, 31 yards; walls 23 feet high and 4 feet of thickness. It is flanked by a circular tower at each corner. The N. E. tower has been completely demolished. The remaining towers are two storied having an internal diameter of 17 feet 7 inches. Each tower is pierced in each story with holes, evidently for the use of hand-guns. In the center of the Rectangular Enclosure was a lofty square tower demolished about 150 ago. The Castle is known locally ‘The Boing’ (Ath Buainc), i.e., the fort of the everlasting (river) – in this case the Blackwater. Dr. Joyce in Irish Names of Places remarks that the Irish seem to have the custom of applying the word ‘buan’ (lasting) to rivers”. Place Names and (Antiquities of the Barony of Duhallow by Michael J. Bowman.2000)

We are informed in “The History of Cork by Charles Smith, Vol 1.”Drumishicane is a good house of Nicholas Chinnery, Esq. Drumshicane was a fortified castle of the O Kiefs, with turrets, and a high square tower in the center, all lately demolished. The walls were built of flat stones or flags exceedingly well cemented”.

The castle of Droumsicane across the Blackwater in the Parish of Cullen witnessed a most colorful cavalcade in Irish History in 1645 with the arrival at the end of October of John Baptist Rinnuccinni Prince Archbishop of Fermoy and Nuncio apostolic to Ireland from his Holiness Pope Urban VIII. He arrived at Droumisciane on the northern bank of the Blackwater across the river from Drishane. He brought with him 2000 swords, 500 cases of petronels, a large consignment of gunpowder and several trunks of Spanish gold. At Droumiscane he met Boetius McEgan, later (1648) Bishop of Ross who was hanged by Broghill at Carrigadrohid (1650).

We are also told O Sullivan Beare in his great march crossed the Blackwater at Boing Ford as it was the one of the few places one could cross the Blackwater in winter except in Banteer. They got food and overnight shelter from the O Keeffes near the Castle but due to a deal made with Carew. He and his followers had to move on in haste. Locally Droumiscane castle is known as the Boing.

It was stated in Canon Costello’s copybook there was a newspaper article by a Bill Cody headed: “Dromagh Castle, a stronghold of a fighting clan” It describes the O Keeffes as “a fearless tribe who brooked no interference by the neighbouring clans or anybody else”. It says: their chief stronghold was Dromagh Castle, which was built in 1601. Others of their castles were Droumiscane and Duragil” (Events in Millstreet History: by Canon Michael Costello 1993)

The castle was taken over in 1592 by the Drishane McCarthys, but was later recovered by the McDonagh-McCarthys of Kanturk, who were overlords of O Keeffe territory in Duhallow.
According to Archaeological Inventory of North Cork. 14360. The castle was owned by Mac Donogh MacCarthys ( O Murchadha 1985, 63). Smith (1750, Vol. 1, 294)

In Francis Guy’s County and City of Cork Directory 1875-1876. It states that Drouminscane Castle is the property of Sir Broderick Chinnery, Bart. It also tells us, “tradition says that at some remote period a battle was fought at Knockonard; and near Keale have been found spurs, spears, bronze battle-axes, and other relics. An ancient crescent of pure gold, weighing nearly 2 ½ oz., was found near Knocknagehy in 1834. 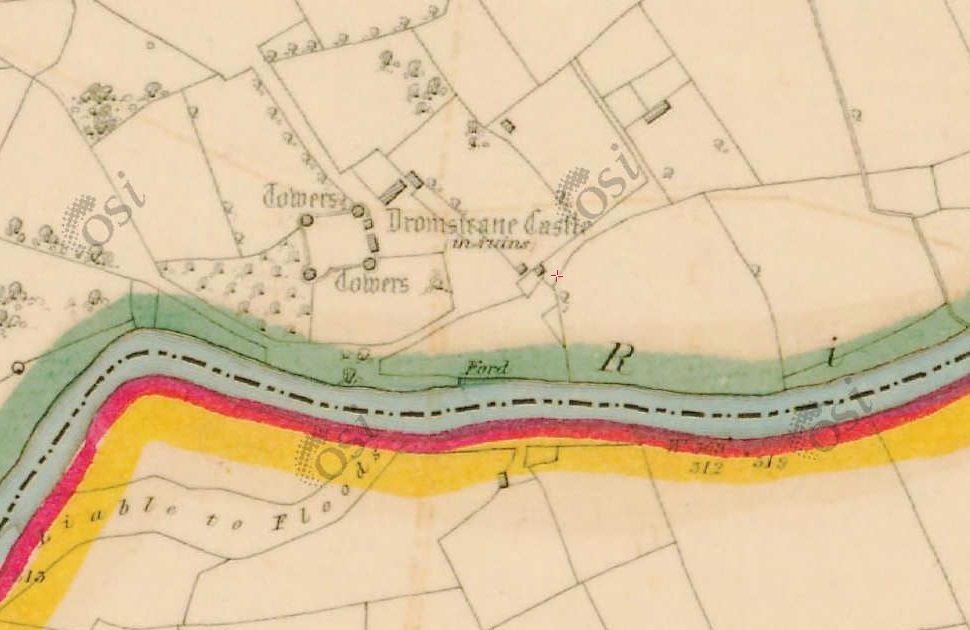 Map of Dromsicane Castle from the 1840s [ref]