The Kerrymans’s table is a large flat rock situated on the Old Kerry Road or the Old Butter Road as it was previously known, four miles from Millstreet on the road to Rylane exactly mid-way between Killarney and Cork City, 25 miles on either side.  It is also about 25 miles from Castleiland, a very important market town for the farmers of Kerry in bygone days.  If one were to look at a map you will notice that Castleiland, Millstreet and the top of Blarney Street where the Butter Market wa situated, form a straight line “as the crow flies.”

Long ago people from Kerry travelled this route on their way to Cork with horse and cart taking firkins of butter to the Cork Butter Market.  This rock is reported to be the place where they stopped and refreshed themselves and rested their horses.  It was also a collection point where people who did not have adequate means of transport brought their living transporting the butter to Cork and returning with hardware for the shops in Millstreet, Rathmore etc. 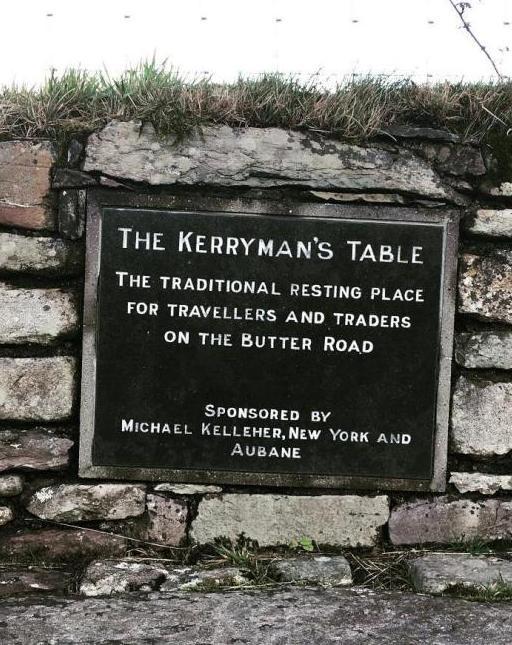 Before 1736, Millstreet Town consisted only of an Inn, a Mill and five small Cabins.  A hundred years later it had one long street with several smaller ones diverging from it and contained 312 houses, the majority of which were small but well built.  Situated on the south side of the Blackwater, amidst the lofty mountains of Muskerry, Millstreet derived its principal support from being a great thoroughfare on the road form Cork to Killarney and Castleisland and on that form Mallow to Kenmare.

The advent of the Railway did much to halt the development of Millstreet as  the landlords of the time. unsure of its impact, kept the line well north of the town.  When roads were developed at the beginning of this century by the first native governments both the Cork-Kerry road and the Kerry-Dublin road bypassed the town and halted its growth as a commercial centre.

In southern Ireland in the 18th century, one of the main exports from Ireland to the West Indies and South America, was butter, mainly because of the mild climate and the many dairy farms in Ireland at the time. One of the main butter roads ran in an almost straight line of about 70 miles long, from Castleisland, Kerry to the Butter Exchange in Cork, where the butter was auctioned off to the highest bidder. The peasant farmers travelled by donkey and cart, bringing their goods to market, and it was a long hard journey, in all weathers.
In the early days, at best the road was a muddy boreen (little road) or cart track. In 1747, John MURPHY of Castleisland was commissioned to build a new and improved turnpike route which became the first true Butter Road.
Sir John CARR, travelling in 1805, wrote : ” … the road is a cross one, and deplorably bad .. we overtook peasants with horse carrying barrels of butter to Cork, secured as usual with ropes of hay…”

Another description of the journey from farthest Kerry was rendered to a Select Committee of Employment of the Poor at Killarney in 1823. It read: ‘I should think the peasant had to travel a distance of about seventy miles from his house and his load was generally two firkins of butter, that was one hundred weight; they travel without lodging, with merely buying a piece
of bread or a sup of milk upon the road …. he travels night and day.’ …
One old woman remembered her grandmother recalling knitting a pair of socks on the Cork road — one going, one returning …
Half way along this road, near Millstreet, is a flat rock called ‘The Kerryman’s Table’, a traditional meeting spot and resting place for those travelling along the way. When you stand on this lonely road today, with only the song of skylarks overhead and a clear view for miles over bogland and heather, you can almost hear the babble of voices and different accents as folk from far distances
arrived at the meeting point.
Even on the journey home, there were still dangers to be faced. Often they were carrying hard-earned money back home, and highwaymen and petty thieves abounded in this countryside, concealing themselves in bushes on the mountainside or lying in wait in remote glens. The road home was as much to be feared as the road out.
With the advent of the railways in the mid 1800s, a lot of the hardship was taken out of transporting the butter, but the road is still there though not used as often, and is mainly used by cyclists and walkers today.

Map of the Castleisland to Cork Butter Road from Google Maps [anotrher version is on  on MapMyRide.com]. The distance is about 53 miles in total.

“Leach an Ciarraidhig” is the old Irish name for the Kerryman’s table [Dúchas: John O’Doherty (1930’s)]