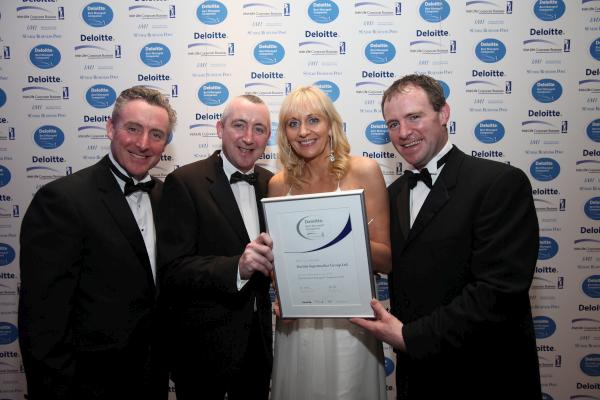 Herlihy Supermarket Group has been named as one of Ireland’s ‘Best Managed’ companies in the Deloitte Best Managed Companies Awards Programme. In total, twenty companies which demonstrated superior business performance were recognised at a gala awards dinner in the Burlington Hotel in Dublin on 4th March 2011. The independent judging panel, chaired by Denis Brosnan, reviewed a broad range of criteria including strategy, capability, commitment, financials and growth potential across all key functions of the business.

Herlihy Supermarket Group is made up of 6 Centra Stores in the Cork area. Its business is grocery retail with particular focus on convenience and fresh food. The stores have on site kitchens and scratch bakeries.

Herlihy Supermarket Group employs over 230 staff and is owned and managed by the Herlihy family who have been in business since 1980.

Thanks to LTV2’s Bernard Crowley, Programme 182 from LTV2 is now available for viewing.   It was first broadcast on 3rd March 2011.   You may now access the programme on the following link:

Happy Viewing and we hope that you are truly enjoying St. Patrick’s Day.   The Millstreet Parade begins at 5.00 p.m..   Do watch out for LTV2’s Seán Murphy’s “Boat on a Float” with some really cool “Leprechauns”!