On this weeks programme we go to Millstreet Country Park for an insight into what goes on there, also we talk to some of the people involved in the upcoming Pantomine Snow White and the Seven Dwarfs in Rathmore, and we have all the usual features plus plenty musical entertainment as well so ……tune in on Thursday Night at 10:00pm with a repeat the following Sunday evening at 8.00pm 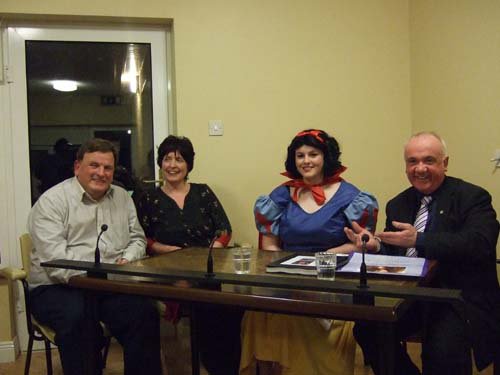 Here we have Sean Radley talking to a Group from the upcoming Pantomine, Snow White and The Seven BIG Dwarfs to be held shortly in Rathmore,there will be a feature about this on Programme No 155… (more LTV2 photos below)

END_OF_DOCUMENT_TOKEN_TO_BE_REPLACED

The Today with Pat Kenny show on RTE Radio 1 resident chef Rozanne Stevens gave a glowing review to the venison produced at Millstreet Country Park recently describing it as an alternative for Christmas dinner:

I get Irish venison from Millstreet CountryPark in Cork. To describe the taste and texture, it is like the most tender, most flavoursome piece of steak you’ve ever had.

The full article is given below:

END_OF_DOCUMENT_TOKEN_TO_BE_REPLACED

Lots of entertainment for the whole family this October Bank Holiday Weekend – walking trails, gardens, archaeological sites, safari buggy tour, children’s outdoor activities, shuffleboard, wildlife and much more. Millstreet Country Park is ideal for cycling too – so why not bring your bike!

This is part of an article that appears in in the Corkman Newspaper this week.

As reported last week, Millstreet Country Park have officially opened their new water feature, in the presence of the Belgian ambassador to Ireland Mr Robert Devriese, former President of the European Parliment Pat Cox, current Minister of Education Batt O’Keeffe, staff and visitors to the Park.

From early in the day there was music with the local Comhaltas Group playing, and followed after by the Duhallow Choral Society. Everyone gathered for the official opening at 5:30 with some words from the speakers and then Mr Devriese pressed the button and after a short time, the water flowed from the top of the fountain. It was a wonderful sight to behold. Afterwards, there were refreshments for everyone.

The Corkman has a report on the opening as did Eily Buckley in her Regional Report 977 this week. Also reported on by the Cork Independent.

END_OF_DOCUMENT_TOKEN_TO_BE_REPLACED

“A spectacular new water feature will be uneveiled at Millstreet Country Park on Sunday with Belgian Ambassador to Ireland Mr Robert Devriese performing the official duties.

The showpiece is a replica of the original Mont des Arts, built in the central square of Brussels in the early years of the 20th century.

The showcase square was created for the Universal Exposition held in the city in 1910. It featured a Park and a monumental staircase with cascading waterfalls descending the gentle slope from the Place Royal down to Emperor Boulevard”

There’s some very beautiful photography of the stone circle in the Millstreet Country Park by Ken Williams at this site , where he has this to say:

Every once in a while you come across a place that puts your head in a spin and in all the confusion you just want to laugh. This is a very odd place. Very, very odd. After seeing a handful of pics in a picture library of a stone circle with some unusual looking arrangements around it, there was nothing else to be done only track this strange place down and see it for myself …

You can read the rest of his article here: http://cianmcliam.smugmug.com/gallery/1537658