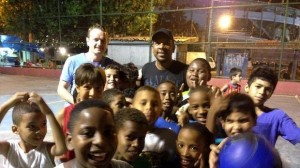 Says Conor: ‘‘FIFA is doing a great job taking the game away from the people.’’ Two years ago, Irish-born Conor had an epiphany. After finishing work as a business analyst at Westpac in Kent Street, Sydney, he needed to kill time before training with Balmain Old Boys, who play in the Canterbury league. He typed ‘‘round-the-world ticket’’ into Google and volunteering abroad came up. ‘‘Guys, I’m moving to Rio,’’ he told his teammates when he arrived at training that night.
Conor, 39, now partners with two organisations in Rio. IASESPE, with which he helps children aged between three and 14, and Carlao’s Football Project, which involves a hundred kids.
‘‘We collect money to buy the kids football shoes, shirts and shorts so they can play,’’ Conor explains. ‘‘Basically, the program provides a safe haven, enjoyment and some male role models. Carlao is a father figure to these kids and not one of them call me Conor but simply Tio, which means ‘uncle’.’’
When you see the infectious nature of the children on this night, the temptation is to empty your wallet to help give them a better life. Conor felt this way, too.

‘‘All the time,’’ he says. ‘‘When I first arrived in this favela, I bought one of the children the strip of Botafoga, one of Rio’s proudest clubs. He then knocked on every door to show off his new shirt. I was swamped with kids the next day.’’

Conor helps coach the children alongside Swede Mikael Gobeze, who was once part of IFK Gothenburg’s youth squad but left because ‘‘I didn’t burn for it any longer’’.

Along with Conor, Mikael is piecing together a documentary on the favela, to be released in September.

What Carlao wants them to teach the kids is to play like a European player, not so much the joga bonito – ‘‘play beautiful’’ – style for which Brazilian players are famous.

‘‘The kids all want to dribble and shoot,’’ Conor explains. ‘‘We are teaching them that passing and marking are far more important. You will hear my Portuguese with a heavy Irish accent imploring the kids, ‘Passar o futebol’ [pass the ball] or ‘Marcar o jogador’ [mark your players].’’

Despite this, Neymar is the only player the kids aspire to be.

…. Conor is all about giving the community as much as he can, too, before visa restrictions see him back in a suit and tie in Kent Street.

‘‘Carlao and I talk football 24-7 and it’s great as we know we can’t save the world, but we can give some security and love to these kids and have great fun doing it,’’ he says. ‘‘Let me stress: the kids give me way more than I can ever give them. Sitting in a bar in the favela on a Friday night watching football and having random kids coming up saying ‘Boa noite, Tio’ [good evening, uncle] and giving you hugs beats the Beach Road Hotel in Bondi.’’

To donate to the Fight for Favela Part 2 charity, click here.

The above is an extract from an article on the Sydney Morning Herald. With thanks to Fergal Collins for letting us know about it