Donie Howard of Kilcorney came across these two very interesting pages recently in a centenary souvenir published by Cork County Council. He was Donie’s Great Grand Uncle and Grand Uncle of Noreen Corkery, Margaret Moynihan and the late Ann Cronin.  He died this month 94 years ago. 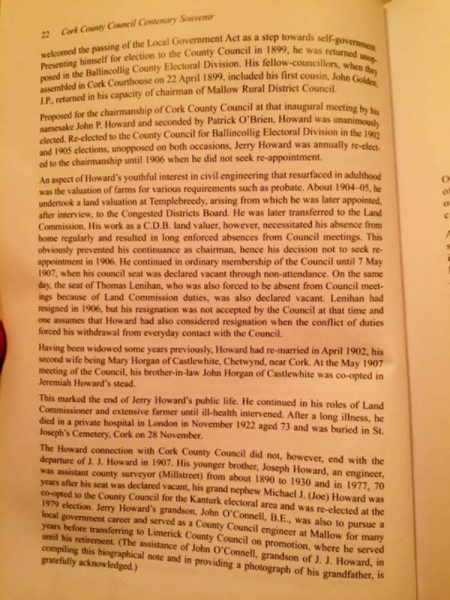 JEREMIAH JOHN HOWARD, to whom fell the honour of being the first Chairnan of Cork County Council, was born on 28 December 1849 at Ivale, Brookpark. Kilcorney. The son of John Howard and Hanora (O’Connor), At that time John Howard held a 272 acre farm under John R. Parker at Brookpark and had a middleman interest in the remaining 475 acres of the townland. He subsequently purchased part of the Parker estate and by 1875 was owner in fee of over 161 acres. Thc land however located on the northern slopes of Mushera, was of poor quality. Having an average valuation in 1850 of under four shillings per acre. Jeremiah was one of ten children and received his early education in Macroom. He subsequently attended St. Colman’s College. where one of his teachers was the future Archbishop of Cashel. Thomas Croke and one of his near contemporaries was the future novelist. Canon P.A. Sheehan. In later life. Howard recalled, as did Sheehan, seeing the funeral of the Fenian Peter O’Neill Crowley passing through Fermoy in 1867.

Despite an ambition to study civil engineering, young Howard on reaching adulthood opted for agriculture and in the 1880s became involved in the Land League and an ardent Parnellite. Marriage to Elizabeth Casey. daughter of a prominent cattle-buyer from Great Britain St. Blackpoo,. brought with it a 240 acre farm at Lehenagh on thc southern outskirts of Cork. (The farm is today almost entirely occupied by Cork Airport.) Besides farming and visiting the English livestock markets on Casey business. he became invloved in public life. He was Hon Sec. of the Cork Agricultural and Industrial Association in the early I 890s and was a member of the Cork Board of Guardians, of which he was vice-chairman for several years.

He inherited an interest in local government from his father. who was a member, and sometimes vice chairman, of Millstreet Board of Guardians, and in common with men of his background was not enamoured of the elitist Grand Jury system that controlled the administration of local government in the nineteenth century and eventually he welcomed the passing of the Local Government Act as a step towards self-government. Presenting himself for election to the County Council in 1899, he was returned unopposed in the Ballincollig County Electoral Division. His fellow-councillors, when they assembled in Cork Courthouse on 22 April 1899, included his first cousin, John Golden J.P., returned in his capacity of chairman of Mallow Rural District Council.

Proposed for the chairmanship of Cork County Council at that inaugural meeting by his namesake John P. Howard and seconded by Patrick O’Brien, Howard was unanimously elected. Re-elected to the County Council for Ballincollig Electoral Division in the 1902 and 1905 elections. unopposed on both occasions. Jerry Howard was annually re-elected to the chairmanship until 1906 when he did not sock re-appointment.

An aspect of Howard’s youthful interest in civil engineering that resurfaced in adulthood was the valuation of farms for various requirements such as probate. About 1904-05, he undertook a land saluation at Templebreedy, arising from which he was later appointed, after reviewto the Congested Districts Board. He was later transferred to the Land Commissiom. His work as a C.D.B. land valuer. however, necessitated his absence from home regularly and resulted in long enforced absences from Council meetings. This obviously prevented his continuance as chairman, hence his decision not to seek re-appointment in I906. He continued in ordinary membership of the Council until 7 May 1907. when his council seat was declared vacant through non-attendance. On the same day, the seat of Thomas Lenihan, who was also forced to be absent from Council meetings because of Land Commission duties, was also declared vacant. Lenihan had resigned in 1906. but his resignation was not accepted by the Council at that time and one assumes that Howard had also considered resignation when the conflict of duties forced his withdrawal from everyday contact with the Council.

Having been widowed some years perviously. Howard had re-married in April 1902, his second wifc being Mary Horgan of Casilewhite. Chetwynd. near Cork. At the May 1907 meeting of the Council, his brother-in-law John Horgan of Castleswhite was co-opted in Jeremiah Howard’s stead.

This marked the end of Jerry Howard’s public life. He continued in his roles of Land comannioncr and extensive farmer until ill-health intentvened. After a long illness, he died in a private hospital in London in November 1922 aged 73 and was buried in St. Joseph’s Cemetery Cork on 28 November. The Howard connection with Cork County Council did not however end with the departure of J. J. Howard in 1907. His younger brother, Joseph Howard, an engineer. was assistant county surveyor (Millstreet)l from about 1890 to 1930 and in 1977, 70 years after his seat was declared vacant, his grand nephew Michael J. (Joe) Howard was co-opted tro the County Council for the Kanturk electoral area and was re-elected at the 1979 election. Jerry Howard’s grandson, John O’Connell, B.E. was also to pursue a local government career and served as a County Council engineer at Mallow for many years before his retirement. (The assistance of John O’Connell, grandson of JJ Howard, in compiling this biographical note and in providing a photograph of his grandgather, is gratefully acknowledged).

h. 1 OW aid w as co-opted to the County Council for the klanturi electoral area and – ounty was also fel -elected at the 1979 ch..0,00 terry itowares grandson. John ()Tonne local genernmene career and sened as a C engineer at Maas(Illowto. fPuorrsaititeln>” Yawl before transfernng to Li Council on promo!’ until his retirement_ (The a.ssistancc of o John O’Connell. Limerick County con Promotion. where he served compiling this biographical not .J. J. Howard. in graiefutiy aekno% k.,j c and in Pros iding a phoit•raogrnadphsbn for g his grandfather. is