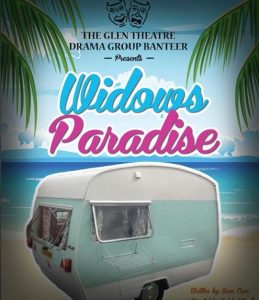 This farcical comedy is set in the 70s and the action takes place in a seaside caravan with five ladies embarking on a strictly Women Only holiday. A case of mistaken caravan identity sends the Widows’ Paradise into disarray with the subsequent arrival of no nonsense Alpha-male Harry his dim-witted sidekick Ernie and Harry’s handsome young son Alan. Add a couple of surprise visitors in the form of Willie and Farmer John and you have what can only be described as hysterical chaos.
What was supposed to be a scene of peace and tranquillity turns into a riotous clash of the sexes, each of the ten characters with his/her own story to tell!.

This hilarious romp is guaranteed to have you in hysterics! Performance on Sunday 17th April @ 8.30pm at the Glen Theatre, Banteer.