At Macroom sports on July 31st 1900 he tested his first success in the athletics arena. It was the first of more than six hundred victories in his career. In 1903 Walsh was first emerging as a formidable weight thrower. In the same year he was captain of Clondrohid football team and was also a member of the Cork team in the Championship against Kerry. In the All-Ireland athletic championship 27/7/1906 Walsh won five national titles. He set a record in the football place kick of 224ft 4 ins which still stands today.

His great rival Matt McGrath, Olympic hammer champion in 1912 stated, “Had Con Walsh competed in the Olympic games he would easily have won the gold medal” – from the Irish Throwers Club

The 1920 Olympic hammer champion, Paddy Ryan (USA), commented on Walsh in a 1958 interview, “Con liked the good life and as far as he was concerned training was not part of the good life. He could have beaten the lot of us but he never bothered with any serious training. He was lazy but thoroughly enjoyed competition and was a wonderful man to know at all times.”

In 2009, Carriganima acknowledged the achievements of Con at the unveiling of a plaque to recognise the winning of a bronze medal for Canada at the 1908 Summer Olympics in London. The plaque is located just to the left of the Carriganima church, outside the farm where Con was born and reared. Read more about the unveiling from the Corkman.ie 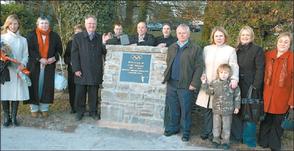 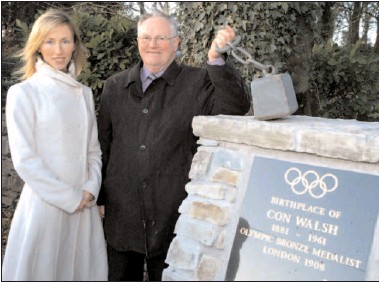 On September 29th 2018 in Toronto, Canada, Con was inducted into the Athletics Ontario Hall of Fame. He was represented on the night by his nephew Ned, grandniece Anne, and grandnephew Michael, who travelled from Carriganima to be there:

Con was a member of a number of Irish born athletes in America called the Irish Whales, here are a few articles on them from

Men’s Hammer Throw at the 1908 Olympics

Interestingly Con’s grand nephew Michael (from the same farm in Carriganima as Con) was in at the Olympics in London this week, and got to see Katie Taylor win gold for Ireland – see the photo where he’s being interview by RTÉ’s Jacqui Hurley

1901 Census – with the family in Carriganima – Farmer’s Son. It appears it may also have been a boarding house.

Cornelius Edward Walsh was born in April 30, 1882 (WWI draft card) in Carriganima, Ireland (naturalization). or April 24. 1885 (WWII draft card and naturalization certificate). According to the 1940 census he had completed high school. he was 6″ 1″ and 216 pounds. He had dark brown hair and brown eyes.

He immigrated to the United States in 1907. He came on the vessel Teutonic and arrived in New York about May 1, 1907. At first he lived at the Seattle Athletic Club.

He was an Olympic athlete who took a bronze medal  in the hammer throw at the 1908 games.

After moving to Seattle to train on the West Coast, he decided to retire from active competition in April 1912. Outside of sports he worked as a police officer, serving as a member and coach of the Seattle Police Forces track team.

At the time of the 1920 census he lived in Seattle, King County, Washington. He lived at 1514 Queen Anne Avenue. He was a policeman.

He married Ada E. Bishop (surname from previous marriage) on June 29, 1922 in King County, Washington. Ada was born June 10, 1883 in Oregon. In 1920, 35 year old Ada was divorced and living in a boarding house at 509 3rd Avenue. She was a store proprietor. She had been married before to George W. Bishop. Ada first appeared with Con in the 1925 Seattle city directory. In 1925 she was a sales person at Rasmussen’s Inc. (marriage cert below)

At the time of the 1930 census he was still in Seattle. He lived at 1520 24th. He gave his birthplace as “Irish Free State.” He was still a policeman.

In 1940 he and Ada were still in Seattle. He was a naturalized citizen. He was still working as a policeman. Ada was a sales person in an apparel shop. They were at 2344 Franklin Avenue and owned their home.

In retirement, he held a job as a doorman at a medical building, where he died in 1961 after falling down an elevator shaft. 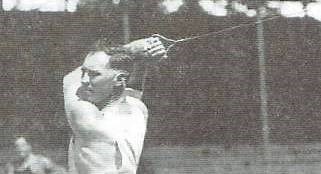 The first photograph of Con Walsh, the world’s weight record holder ever taken in California 1912-02-22 [The SF Call] 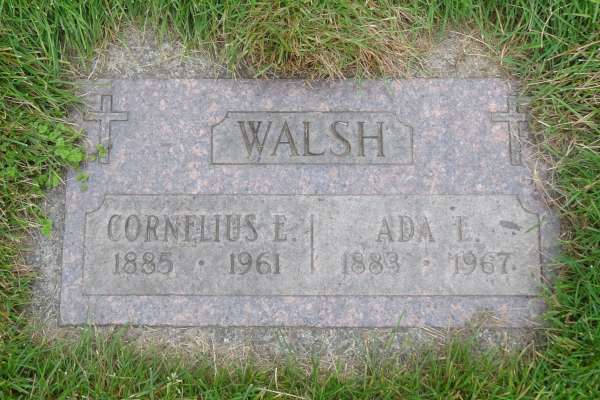 Con was born in Clondrohid, Co.Cork in 1881. He was a member of the Cork teams that lost the 1901 and 1903 All -Ireland football finals. He won the GAA place kicking title in 1901, 1905 and again in 1906, setting a distance record that remains to this day. In 1906 he also captured five titles at the GAA national athletics championship.

In 1907 he emigrated to New York before moving on to Toronto. Representing Canada, he won bronze in the hammer event at 1908 Olympics behind John Flanagan and Matt McGrath. This was the first time three athletes of the same nationality had finished first, second and third at an Olympic event. He captured several American and Canadian titles before abandoning athletics in 1911 to pursue an unsuccessful attempt to become a professional boxer. He eventually settled in Seattle and joined the local police force.

“The lady in the Seattle Police Department Museum knew instantly who I was talking about when I mentioned Con Walsh. She’d come across some photos of him just a few days previously, one in athletic gear, the other in his officer’s uniform. She was aware he had the reputation of a sportsman but wasn’t quite sure the extent of it. She didn’t know that before hitting the streets of Seattle as a cop, Walsh took a bronze medal in the hammer throw at the 1908 Olympics, set a slew of world records, and played in two All-Ireland football finals for Cork.

Very few Irish athletes can match that CV for diversity and breadth of achievement, and the pity is that far too many people in his native county have even heard of him. In bygone eras when the electronic media hadn’t shrunk the world, we tended to forget too easily about those who went away. That Walsh won his Olympic medal wearing a Canadian singlet doesn’t diminish the fact that the people of Clondrohid claim him as one of their own.

The job of somebody writing a sporting history of somewhere with as rich a sporting heritage as Cork is to juxtapose the tales of sepia-tinted heroes like Walsh with the more recent televised triumphs of Roy Keane, Denis Irwin and Sonia O’Sullivan. It’s both a challenge and a joy.” 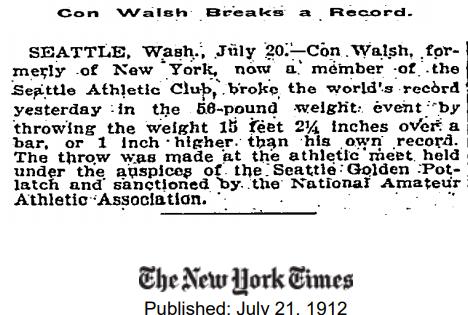 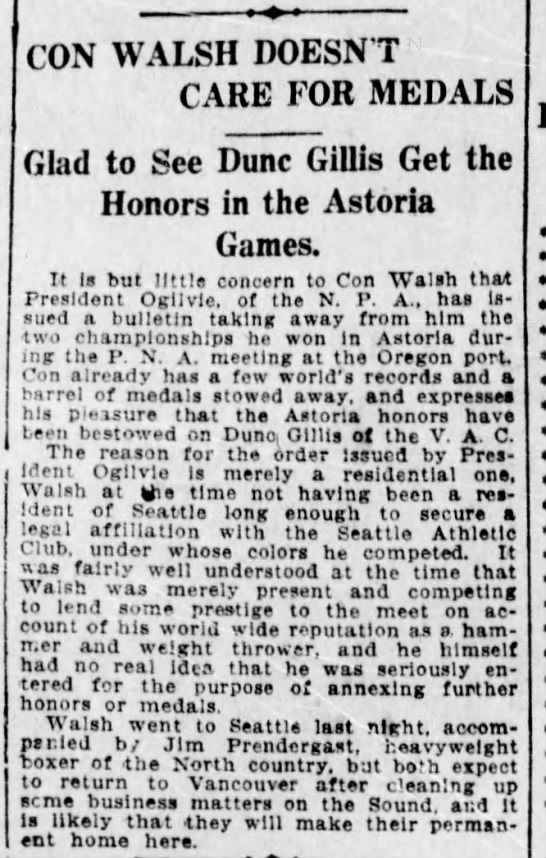 CON WALSH DOESN’T CARE FOR MEDALS Glad to See Dune Gillis Get the Honors in the Astoria Games. It Is but little concern to Con Welsh that President OKllvle. of th N. P. A., has Is sued a bulletin taklnc away from him the two championship, he won In Astoria during th. p. N. A. meeting at the Oregon port Con already ha. a few world’s records and a barrel of medals stowed away, and expresses ni. P’usure that th. Astoria honors h.v. been brstmved on Dunoi Olllls of the V. A. C. The reason for th. order Issued hv Pres ident OKllvle I. merely a residential one, Walsh at ha time not having been a resident of Seattle long enough to secure a leRol affiliation with the Seattle Athletic Club, under whose colors he competed. H as fairly well understood at the time that Walsh was merely present and competing to lend si.me prestige to the meet on account of hi. world wide renutatlnn as a hammer and weight thrower, and he himself naa no real idea that he was seriously entered for the purpose of annexing further honors or medals. Walsh went to Seattle last night, aocom – ptr.led b Jim Prendorgast, heavyweight boxer of the North country, bat bofh expect to return to Vancouver after leaning up seme business matters on the Sound, and It Is likely that they will make their permanent home her – [Vancouver Daily World, 01 Dec 1911] 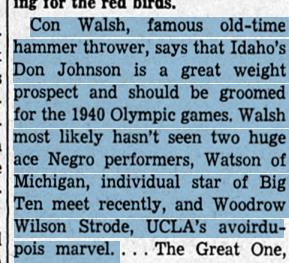 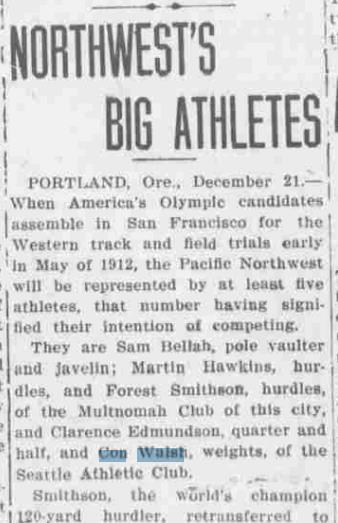 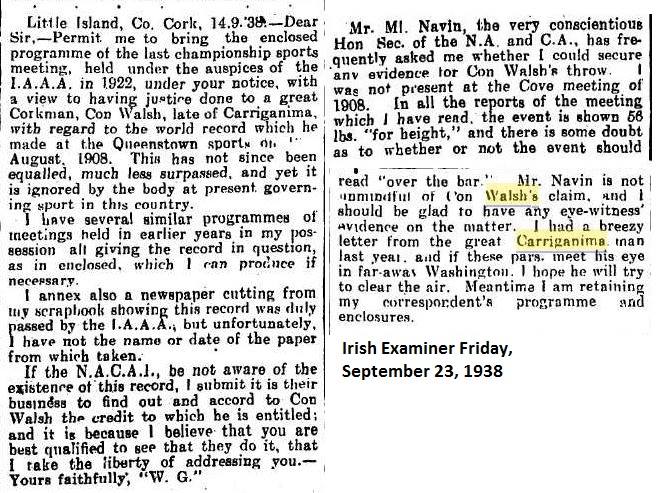 Con’s brother Michael was also a weight thrower, and was reputedly much better than Con. However he suffered an accident when one of his weights landed on him and injured his leg, leaving him unable to work  properly.

He set up and ran the dance hall in Carriganima, beside the church, where the priests house is now located. 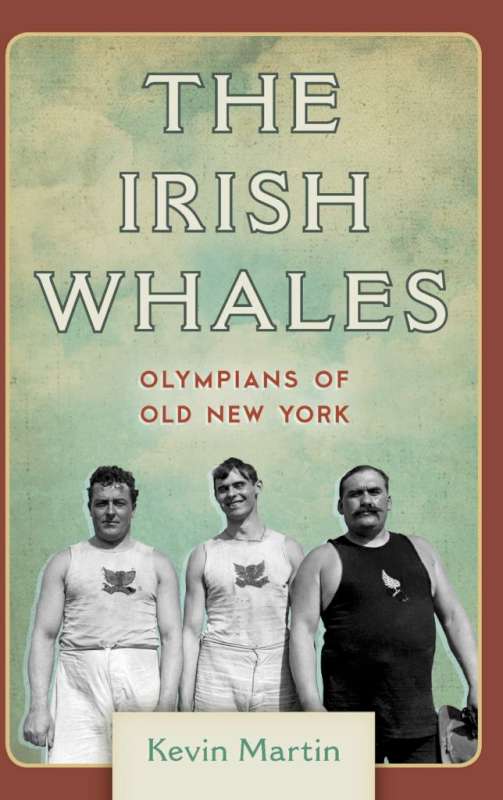 Published in 2021, Con Walsh is featured in the book as one of the Irish Whales.  Here is an extract:

“The illustrious group was completed by the imperious Martin Sheridan from Bohola, County Mayo, three times Olympic gold medal winner John Flanagan from Martinstown, County Limerick, and Con Walsh from Millstreet, County Cork.
With the exception of Walsh and Ryan, all were members of the New York Police Department. Some suggest that the blue tunics they had to wear as part of their job gave them the appearance of large mammals, another possible creation story for their collective name.”