Today marks the 100th anniversary of the Rathcoole Ambush, one of the largest and most successful ambushes by the IRA during the War of Independence, which increased pressure on the British Empire to leave Ireland to the Irish..
The IRA laid landmines in the road, and detonated them as a convoy of Auxillaries passed over them, disabling two vehicles and trapping three more. Two auxiliaries, both only 20 years old, William A.H. Boyd, and Frederick Shorter were killed in the ambush, and many more injured.

END_OF_DOCUMENT_TOKEN_TO_BE_REPLACED 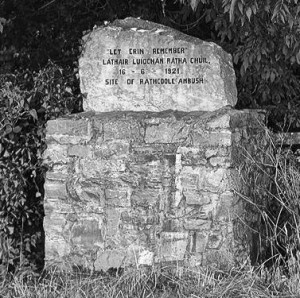 On the night before the ambush the I.R.A. volunteers slept at Rathcoole Wood, which overlooked the planned ambush position. Shortly after sunrise the following morning, Captain Dan Vaughan laid six landmines on the END_OF_DOCUMENT_TOKEN_TO_BE_REPLACED