The Eurovision Song Contest 1993 was broadcast live from the Green Glens Arena, Millstreet, Co. Cork on May 15 to an international audience of over 350 million people.

Work on the project commenced in September 1992 with a feasibility report highlighting the staging difficulties of the Millstreet arena.

Addressing the main problem of lack of height in the venue led to two key features of the final design, namely a three foot excavation of the area under the stage to accommodate underfloor lighting and a 60′ wide tilted ceiling piece to allow cameras to shoot wide and high without shooting off the set.

The entire floor area was lit from underneath by architectural lighting units spaced 6″ apart and gelled alternately red, green and blue. These colours could then be mixed to produce a limitless palette.

The construction needed to accommodate the underfloor lighting was complex. A substructure of “alubeams” supported a grid of custom made clear polycarbonate “i-beams” within which the architectural lighting tubes were installed. On top this was laid 2 layers of box-section polycarbonate in opposing directions to give enough support for a concert grand piano. A third layer of thin textured polycarbonate was used to further diffuse the light. 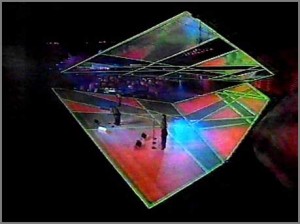 The 3′ excavation under the stage was necessary to accommodate this construction, to allow access for replacement of faulty lighting units and to create enough airspace to disperse the considerable heat generated by the lighting units. A specially installed cooling plant was also required to ensure the floor remained cool. The temperature was monitored throughout rehearsals and the show by means of sensors under the floor.

The upstage section of the stage was ramped to meet the ceiling piece at a single point and incorporated a concealed doorway operated hydraulically which dropped to form an entrance walkway on-stage for presenter Fionnuala Sweeney.

The ceiling piece was designed to mirror the shape of the floor area of the set then tilted in two planes creating a varying aspect on camera when seen from different angles. Internal lighting channels matched those of the floor while mirror finished inset panels reflected the floor lighting itself. Alternate spaces between the channels were left void to facilitate backlighting of the performers.

The orchestra was positioned camera left of performance area in a three foot deep orchestra pit.

A twenty foot high backlit cyclorama surrounded the entire stage area allowing for a high key look to the background or a completely dark look as required.

Two giant video screens either side of the stage showed program output for the benefit of the live audience and the computer generated scoreboard during the voting sequence.

From Alan Farquharsan – the production designer