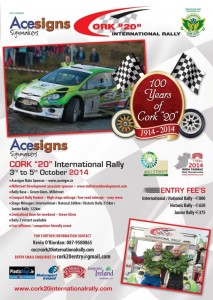 With the news breaking last week that AceSigns Cork are to become the title sponsor of this year’s 100 year centenary Cork 20 International Rally, the Club under the leadership of Kevin O’Riordan (Clerk of the Course) are now busying themselves with the organising and running of the event.
Kevin stated now that the Financial side of the Rally is underpinned it leaves the team and I left to concentrate on the rally itself. This year the Rally will have a real Carnival atmosphere surrounding the town of Millstreet. Having an event such as the Cork 20 running for a hundred year’s is something the members of Munster Car Club are very proud about and rightly so. Indeed it is a great honour for me as C.O.C on this very special year. I will be outlining details of the event over the coming months but at this early juncture I would like to point out that we will have centralised service in the renowned Green Glens Arena which proved to be classed as one of the best service area’s on the 2013 Irish tarmac Rally Championship calendar. This means that service crews can set up in the Green Glens arena on Friday and not move a service barge until Sunday evening. We will be basing all our stages around the Millstreet area for the October 3rd – 5th event. There will be a number of other events happening over the weekend not only in the service area but in Millstreet town as well. O’Riordan continued that he would like to thank the Duggan family for the use of their world renowned venue where Riverdance first came to our screens when the Eurovision song contest was based in the venue.
Full accommodation lists will be published over the coming weeks so as people and crews can book their beds early to avoid disappointment. The 2014 AceSigns Cork 20 International Rally is the final round of the Clonakilty Blackpudding Irish Tarmac Rally Championship where points and a half will be on offer. The Rally is also a counting round of the Plasticbags.ie Southern 4 Rally championship as well as being a round of the Munster Car Club Championship.

Full  details are at:  munstercarclub.com