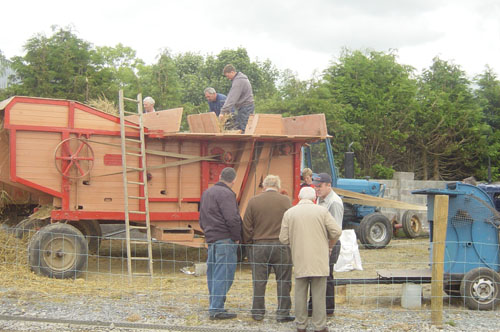 Old Time Threshing & Vintage Rally: – . Brilliant sunshine helped boost the attendance at the 10th revived annual Harvest Afternoon in Cullen on Sun. July 20th. Weather conditions were excellent after the inclement weather conditions of previous weeks, the Lord smiled on us for the occasion with a bright sunny day. This year we again decided to honour our own patron saint by holding it on Laitiarian Sunday. The huge crowd attending was a clear indication of its popularity. The occasion was for the display of vintage machinery including, cars, tractors, steam and stationary engines, which were even bigger and more interesting than last year with a variety of items on display.
As usual a very special thank you must be extended to PJ Murphy and staff who once again reenacted the old time threshing for us on the day with his fine 36″ Garvie. Thank you also to Johnny Hickey, Shanaknuck, who as usual displayed how threshing was done before the big mobile machinery was available. Johnny is the proud owner of an old threshing drum which is in perfect working order. This was driven by his 1950 Grey Ferguson TVO. These drums were originally driven by a large gear, powered by horses. Johnny’s threshing drum is one of very few left in the country and can be seen at many rallies around Munster. The parade of the vintage tractors proved to be one of the main highlights with engines and cars coming from the county and across Munster.

We got the corn for the threshing from Castletownroche again this year.

On the entertainment side we had various tractor driving skills, Children’s Sports expertly run off by Derry Morley, Bouncing Castle, Bottle Stall, Drive the Nail; Guess the name of Doll, no. of beads in necklace, and no. of sweets in jar, guess the weight of lamb and raffles for very valuable prizes generously sponsored.

It is impossible to name everyone individually because as usual we were able to rely on the kindness of many people to help us out on the run up to the event preparing the field, volunteers who help with running the numerous side shows, give out the tea and coffee, man the gates, assist with parking etc. The success of the afternoon is due to the generosity of the sponsors, exhibitors, organizers,to all helpers, media and stewards, without whose assistance the occasion could not have been possible, also the general public for their generosity to a very worthy cause.

The list is endless and without you this great family day out would not take place.

Great credit and thanks is due to the commitment of the committee which resulted in the Rally each year being bigger and better than the previous year. Since it was revived in 1999 it has become a focal point for the community as it also celebrates Laitiaran Sunday.

The award winning Cullen Pipe Band opened the gala afternoon with their selection of tunes – second to none. We congratulate them on their recent successes.