… The most important and prominent of the Ninth’s Fenians was Timothy Deasy (also spelled Dacey), whose story MacNamara included in his regimental history. Deasy attained the rank of first lieutenant in the Ninth and received a wound at the Wilderness, As a Fenian overseas, he led an uprising at Millstreet, Co Cork, and was later assigned to oversee activities in Liverpool. At three o’clock in the morning on September 1867, Col Thomas J. Kelly and Deasy were arrested by the by the English while loitering on the street after a meeting of Fenian officers in Manchester. Both were brought before a magistrate, and the case was remanded for a week while a rescue attempt was organised. On September 18, the two prisoners were being transferred from the Manchester Court House to the county jail in a police van, handcuffed, separated and guarded by twelve unarmed police officers. As the van passed under a railway arch, thirty Fenians armed with revolvers stopped it, shot one of its horses, and called for the prisoners freedom. When this request went unheeded, the small mob shot Sergeant Charles Brett dead inside the van, took his keys, and released Kelly and Deasy. Despite a reward of three hundred pounds for their recapture, the liberated Irishmen escaped to America while three Fenians were executed for Brett’s death… [1].

The uprising was a raid upon the “Castle of Mount Leader”, and they took what arms were in it, as arms supplies promised from America were not forthcoming [2].

The three men executed for the death of Sergeant Brett famously became known as the Manchester Martyrs [3]. 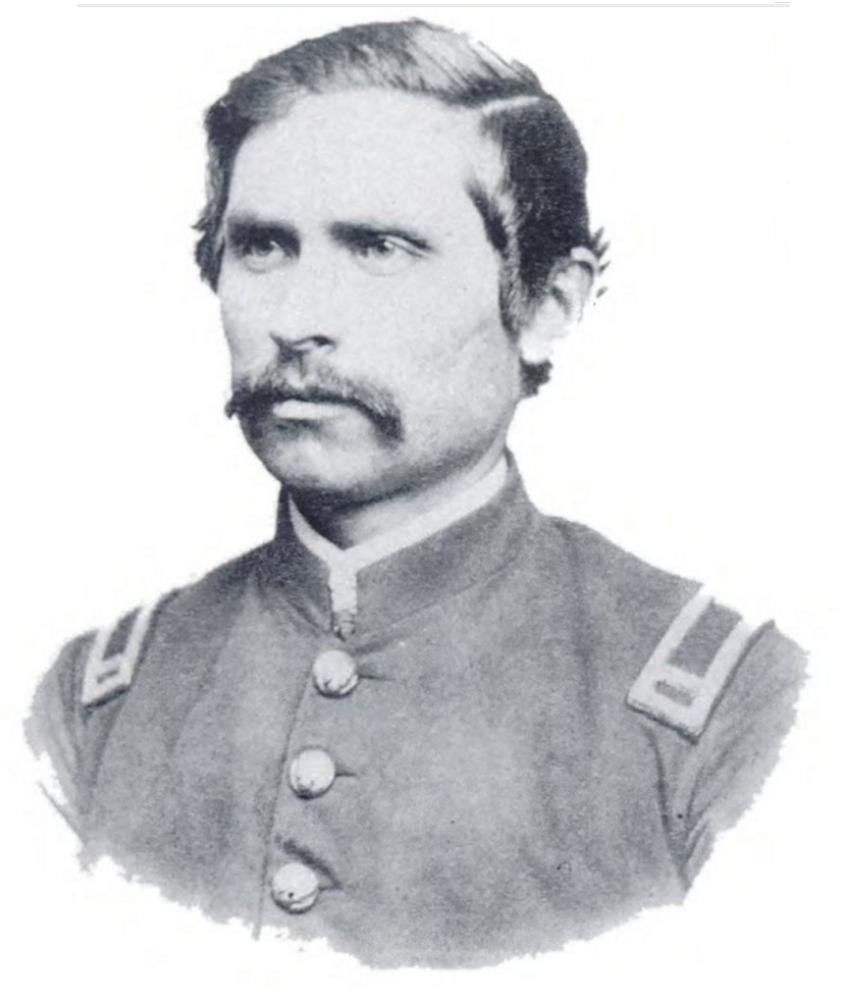 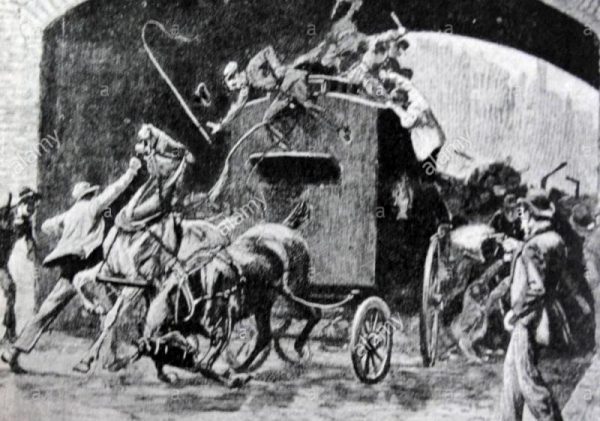 Engraving depicting the rescue of Thomas J. Kelly and Timothy Deasy from a prison van during the Fenian Outrages. [*] 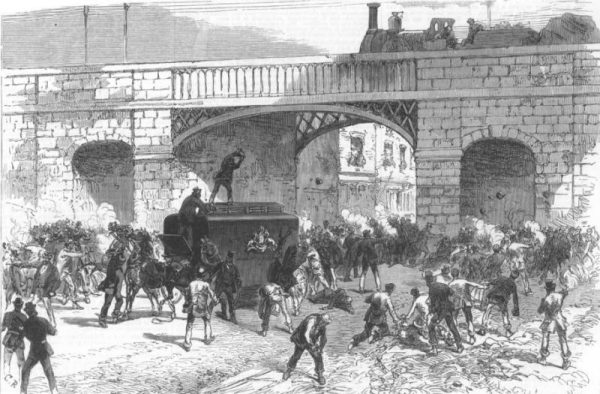 Smashing of the Van, 1867. Escaped Fenian Captain Timothy Deasy was buried in Immaculate Conception Cemetery, in Lawrence Massachusetts in 1880 [*]

“This Irish man fought with the 9th and was wounded in the Wilderness battles.” 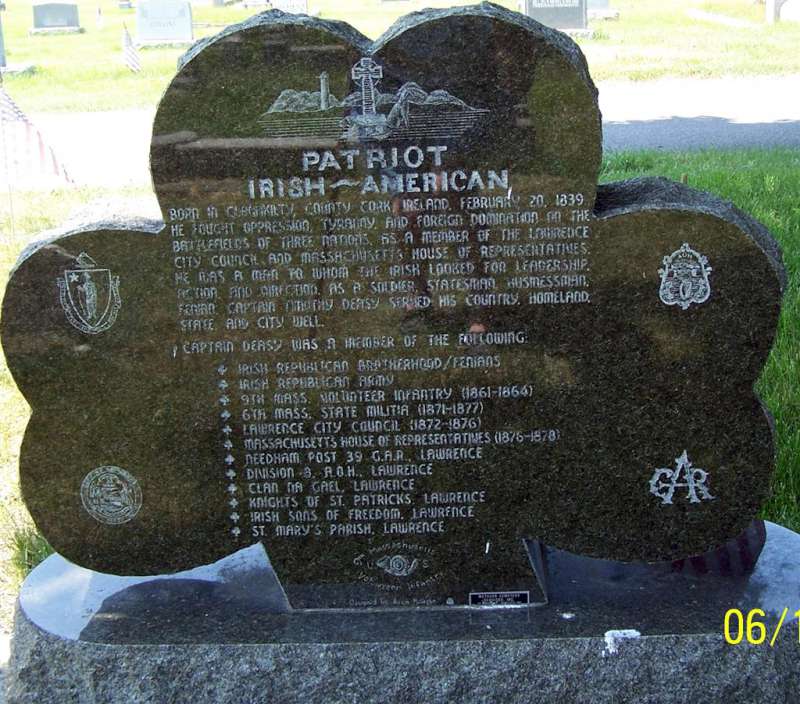 Deasy died in 1880 (aged 40–41), and was buried at Immaculate Conception Cemetery, Lawrence, Essex County, Massachusetts, USA. The above headstone which was erected in 1992 reads:

Patriot – Irish ~ American
Born in County Cork, Ireland, February 20, 1839. He fought oppression, tyranny, and foreign domination on the battlefields of three nations.
As a member of the Lawrence City Council and Massachusetts House of Reperesentatives, he was a man to whom the Irish looked for leadership, action and direction as a soldier, statesman, businessman.
Fenan Captain Timothy Deasy served his country, homeland, state and city well.

Captain Deasy was a member of the following:

Deasy’s legacy is carried on his Great-Grandson Bob Batemen who has visited Ireland on numerous occasions and has left historical items with Millstreet Museum as well as other museums. He has also written a paper on the life and times of Deasy which can be read here.

Remembering West Cork Fenians and the Rescue at Manchester – In the early hours of September 11, 1867, two young men were arrested for loitering outside of a storefront on Oak Street in Manchester. Unknowingly, the apprehending officers had set into motion a series of events that would prove to be one of the great dramas of 19th-century Irish history …(West Cork People)

Kelly and Deasy Descendants Meet on Easter Sunday 2015 – For the first time in since 1867, descendants of Colonel Thomas J Kelly and Captain Timothy Deasy meet. This happened at the grave of Colonel Kelly… (TheWildGeese.irish)

On July 1st 2016, new Cork Mayor Seamus McGrath accepted a number of historical items from Mr. Bob Bateman, great-grandnephew of Capt. Timothy Deasy. Mr Bateman travelled from the US. The items will be on display in the museum in Millstreet: 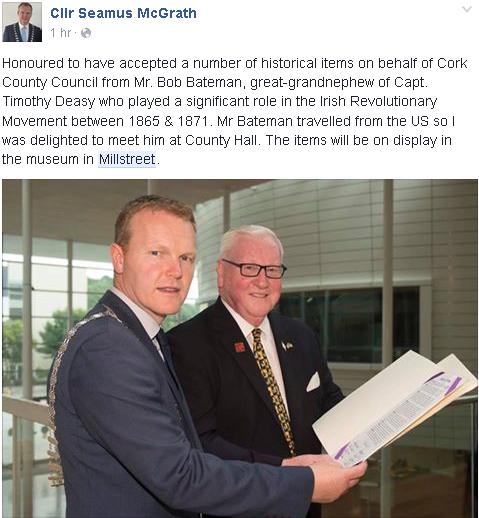