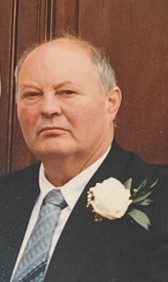 As we approach the First Anniversary of John’s passing, his brother Timmy, sister Margaret and the extended Murphy family would like to acknowledge the many gestures of kindness, sympathy and support shown to us at the time of John’s death and over the last year.

Our appreciation goes out to those who sent mass cards, texts, letters, phone calls, floral tributes, submitted online condolences and visited the family. To those who provided food and helped in any way big or small, it was very much appreciated especially considering the Pandemic restrictions in place at the time.

Our sincere thanks go out to the Paramedics, members of An Garda Síochána, Fr. Jack Fitzgerald, Dr. Christina Walsh, Davy Tarrant & Timmy Twomey of Tarrant’s Undertakers for their support and professionalism on that sad morning the 9th of May.

We wish to thank John O’Leary of O’Leary Undertakers for his support, guidance & empathy to the family with the funeral arrangements.

We would like to thank Cullen GAA members who provided a guard of honour along the avenue from Rathduane house on the day of his funeral and to Der O’Connor who placed the Cullen flag upon his coffin. Our thanks to the Ballydaly Cards club members who lined the road outside Ballydaly Hall, to John’s friend Ritchie O’Connor, the Ballydaly Athletics club members, and all John’s sports colleagues, neighbours and friends who stood guard on his final journey to St Patrick’s church. We thank his close friend Tom Owen O’Sullivan & neighbour John Joe Murphy who watched over the family home during the funeral.

To those who attended or participated in John’s funeral mass at St. Patricks church and those who watched remotely via livestream we would like to thank you for your support.

To all the readers, church secretary Sharon Lane and sacristan Marcella we thank you sincerely. For the music and singing performed by Loraine Ryan (John’s niece) & Loraine’s sister-in-law Shirley Ryan Murphy we express our sincere gratitude.

A special heartfelt thank you to John’s cousin Susan O’Connor who represented the family with an outstandingly compassionate eulogy that summarised John’s life very well.

It is impossible to thank everyone individually so please accept this acknowledgment by the family as a sincere expression of our deepest gratitude & thanks.

Masses have been offered for your intentions.