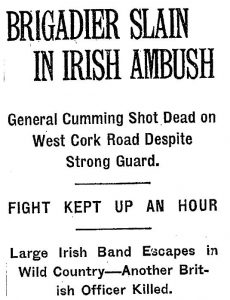 Discovered among Bill’s papers were two copybooks of fascinating historical, dramatic and poetic material dealing with the ambush that lay incomplete at the time of Bill’s death. In this time of seismic Irish revolutionary centenaries the play deserves and demands to be finished to do justice not just to the playwright but to the men who fought and died that day at Clonbanin.

“I was given this play a few years ago by the writer’s family and over time it has slowly taken such a grip on my imagination that the time is now right to do justice to the playwright and bring this “lost” exciting piece of theatre to life.”

Read about the Clonbanin Ambush in this an old article on Millstreet.ie: