At 3 a.m. on the morning of the 3rd. March, Moylan’s column moved out for Clonbanin and was in position by 6 a.m. They were joined by a section of the Kerry No. 2 Brigade Column, under Commandant Tom McEllistrim, and a detachment from Charleville Battalion Column, under Commandant Paddy O’Brien. The Newmarket and Charleville units occupied positions on the northern side of the road. The Kerry men and a section of the Millstreet Column had positions on the south side of the road. They had one of the Hotchkiss guns captured at Mallow, manned by Bill Moylan and Denis Galvin. The remainder of the Millstreet Column occupied a position covering the roads from Kanturk to deal with expected reinforcements from that direction. The local companies provided scouting and protective elements. 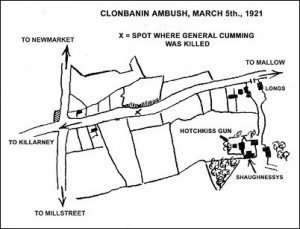 Commandant Paddy O’Brien detailed the sections to their positions and Commandant Moylan arranged for the laying of the half dozen road mines which the force had. And at 7 a.m. the column was ready for action. Strict instructions had been given to the section com­manders that fire was not to be opened on any target until a mine was exploded, the explosion being the signal for attack. This was necessary because of a decision come to by Commandants Moylan and O’Brien that a very small British force passing through the position would not be attacked, as long as the hope of intercepting a larger target existed.

At 10 a.m. the outposts signalled three lorries coming from the east. This was unexpected, but Moylan and O’Brien decided to attack. As the leading lorry drove over the mine controlled by Moylan he pressed the switch but there was no explosion. At the same moment O’Brien, covering the driver, pressed the trigger of his rifle. The round failed to go off. Incredibly, the three lorries passed through the ambush position, a soldier in one of them playing an accordion, the others singing, blissfully unaware of how close they had been from disaster. It later transpired that the reason for the mine failure was that high tension wires were being used with a low tension battery.

However, it was still early in the day and the expected convoy from the west would surely make an appearance. The men settled down again for a long wait. At 2.15 p.m. the patience of the waiting column was rewarded; a convoy was signalled coming from the west. It consisted of three lorries, an armoured car and a touring car. The vehicles were spaced, as had been anticipated, at such intervals as to cover half a mile of road. No attempt was made now to use the mines. Fire was opened on the leading lorry, the driver was hit and it was ditched. A burst from the Hotchkiss penetrated the slit in front of the driver of the armoured car; the driver was wounded and it too was ditched. The remaining vehicles halted, their occupants dismounting rapidly and seeking whatever cover was available. A tall man in officer’s uniform was seen to jump from the touring car and run for cover on the north side of the road. He was shot down before reaching there and was later discovered to be Brigadier-General Cumming.

The action intensified and developed into a long duel that did not end until dusk. Shortly after the armoured car was ditched its heavy machine-gun came into action and continued firing during the entire course of the fight. The opposing forces were about equal in strength but the British had the advantage of heavier weapons and a far better supply of ammunition. The armoured car commanded the road and prevented two efforts made by the IRA to drive in the flanks of the British position. The British forces, too, attempted an outflanking manoeuvre but it was defeated by IRA. fire. The British had the advantage also of a deep ditch and several houses which gave them cover from the fire of the Kerry and Millstreet units on the south side of the road.

The I.R.A. had no means of putting the armoured car out of action and they always had to consider the possibility of reinforcements reaching the British. The sound of firing could be heard distinctly at Kanturk, Newmarket and Millstreet, and reinforcements from these posts would eventually arrive. General Cumming’s brigade headquarters at Buttevant was only twenty-five miles away, and the fight had continued for well over two hours. As dusk drew in it was decided to withdraw, the Kerry and Millstreet units to the west, and the Newmarket and Charleville units north to Kiskeam. It was learned later that the British casualties were thirteen killed and fifteen wounded. The columns suffered no casualties.

This article originates from Cork’s War of Independence 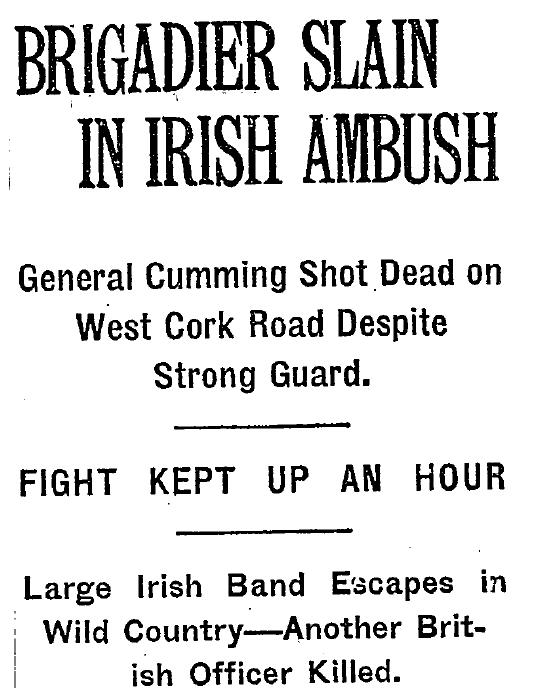 FIGHT KEPT UP AN HOUR

… who were the rest of the 13 mentioned as killed. The death registrations only list the four: 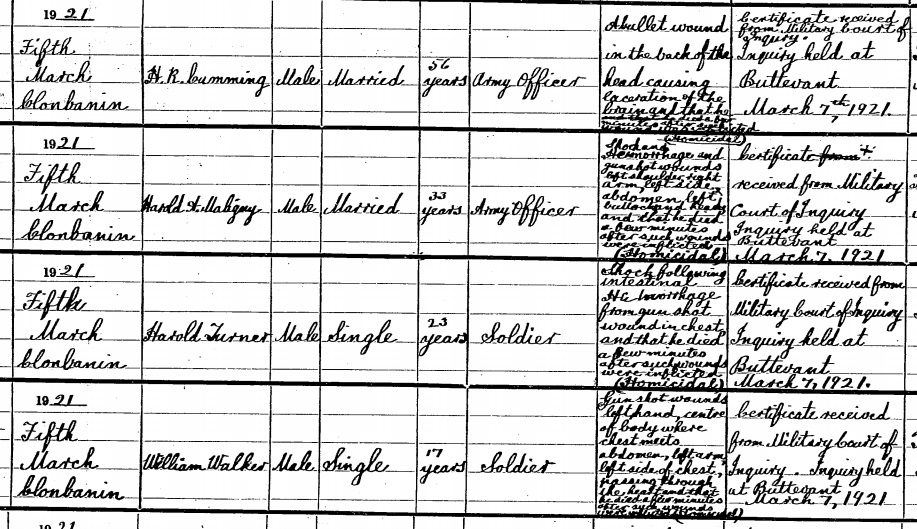