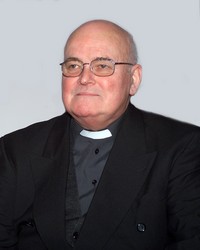 His final parish was English Martyrs, Addingham where he was Parish Priest for sixteen years until his retirement in 2012.

Fr Jerry retired to the newly developed flats in the Manor House, Otley where he lived alongside several other retired priests until his recent illness.

The following arrangements have been made for his funeral.

O’MAHONY Rev. Fr. Jeremiah Joseph Of your charity please pray for the happy repose of the soul of Fr. Jerry who passed away on May 2, 2015, aged 80 years. Fr Jerry was Parish Priest of Sacred Heart, Sowerby Bridge, St. Edmund’s, Castleford, The Holy Spirit, Heckmondwike and English Martyrs, Addingham. Loving son of the late Daniel and Catherine O’Mahony, Mill Street, Co. Cork, Ireland. Dear brother of Connie, Donal, Margaret and the late Timothy and Hannah Clare. A loved brother-in-law, uncle and great-uncle. Fr. Jerry will be received into English Martyrs Catholic Church, Bolton Road, Addingham on Thursday, May 21 at 7.00p.m., for Mass. Requiem Mass will be celebrated at the Cathedral Church of St. Anne, Leeds on Friday, May 22 at 12 noon prior to repatriation for Mass in St. Patrick’s Catholic Church, Mill Street, Co. Cork followed by burial. “May He Rest In Peace”

from the Likely Gazette