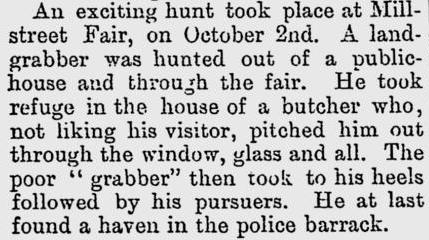 The humerous extract on the right appeared in the “The Irish Canadian” newspaper,  on Thursday October 22nd 1885.
—-
It wasn’t the first time it happened:
“HUNTING A BAILIFF – Great excitement was caused in Millstreet last evening by the presence in the main street of the town of a bailiff named Daveron, who was immediately set upon by the people, hooted, and booed down the street. The violence of the crowd increased so much that Daveron was compelled to seek refuge in the police barrack. He was unable to get a lodging. His business was to serve a writ.” – from the Irish Examiner 2nd July 1881.

Text: An exciting hunt took place at Millstreet Fair, on October 2nd. A landgrabber was hunted out of a public house and through the fair. He took refuge in the house of a butcher who, not liking his visitor, pitched hum out through the window, glass and all. The poor “grabber” then took to his heels followed by his pursuers. He at last found a haven in the police barrack.

from the “The Irish Canadian” newspaper,  on Thursday October 22nd 1885