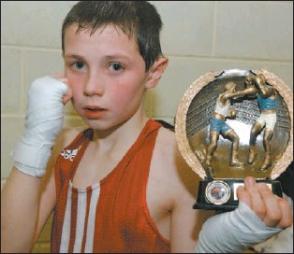 Onto the national semifinals, Seán Og bettered Vasgl Checjansky from Drogheda in a merited semi-final win. That placed him into the decider where from a close duel, the destination of the spoils hinged on the last round where Seán Óg relented to Cypril Bealty from Carlough club.

For his part, Eric Barrett secured county and Munster championship honours. Securing a passage to the All-Ireland semifinal, Eric enjoyed a triumph over Noel Foy from Gilword. However Eric’s gallant bid for outright honours ended on a defeat to Seán Conroy of Kilmaine.

Ultimately, it was tough luck on both Seán Óg and Eric who showed great character and resolve to secure county and Munster accolades. And though national glory eluded the boys, both possess enough talent to make inroads in their boxing careers.