The battle royal.  The closest finish of any rally, anywhere.  Billy Coleman capturing his third victory on the final stage by a single second. It was the battle which surpassed all the great Donegal rallies of the past as the Rothmans Porsche of Coleman gradually reeled in McHale’s Dealer Opel Team Ireland Manta until the climax in that nail-biting finish on Sunday afternoon. It was a head-to-head contest so absorbing it would have been magic to have been there.

In the build-up to the third round of the STP Tarmac Championship, the talk was about Tony Pond and the first appearance of new Metro 6R4; about Coleman’s fourth place on the World Championship Tour de Corse; about the late intervention of Bertie Fisher and about how these outside factors would affect the McHale quest for the Tarmac title. If Pond’s Metro lasted it would win but it not, as expected, then it was down to old rivalries between Coleman, Fisher and McHale.  On the evidence of what had gone before Fisher was favourite in the Meeke built GM Dealer Sport Opel Manta 400. Out from Letterkenny on day one, Pond in the little ARG projectile set the pace with McHale and Coleman some way back but separated by one second only.  Fisher started cautiously and was only fifth fastest. 1 stage two it-was Pond again with Coleman and McHale-returning times just 2 seconds apart.  Fisher, however, was in trouble; rear axle starting to tighten up and finally seizing on the road section after the stage.  A breather pipe had been kinked during installation of the axle, causing it to overheat.  One of the favorites was out. It was Pond faster again on stage three but McHale was getting into the groove and was 5 seconds quicker than Coleman.” Stage four was the flat-out blast over the mountain at Glendowan where Pond was again fastest, reporting later that he had been pulling 930Orpm in fifth gear, 147mph! Coleman too, was flying, just 9 seconds slower than Pond and 23 quicker than McHale, who had been slowed towards the end by a puncture.  Coleman, however, had encountered his first problem. A heavy landing out on the stage had bent the sumpguard of the Porsche and at service repairs were carried out.  However, the Porsche mechanics tailed to complete the job on time and Coleman re-joined the battle minus the protective sumpguard.  When or how the sumpguard was re-fitted is not quite clear but Coleman saw a 19 second advantage over McHale turn to a 44-second deficit over the next four stages, the Dubliner now leading following the demise of the Metro which had gone out with engine failure.  By the end of the first day the gap was 40 seconds and McHale was well pleased with the situation.  He had gained a useful lead without having to over-extend either himself or the car and the battle was finely poised for the Saturday stages, the real heart of the rally. It was McHale, however, who had a fright when the time came for a re-start; the Manta was reluctant to fire up.  The word at the time was that the Opel’s engine had not been running when it left parc ferme, an offence, which carried a penalty of 30 seconds.  Austin insisted it was running, albeit on only two cylinders, and the marshal on the spot could not be certain either way.  The outcome, however, was no penalty even though Coleman’s co-driver Ronan Morgan tried to lodge a protest but was refused on technical grounds.  It was a narrow escape for the Opel team.

Stroke of luck No.2 for McHale came on the second stage of the morning, Atlantic Drive, where Billy who had trimmed one second back off the lead on Derrylaggy, slid wide into a rock, puncturing a wheel.  He dropped 40 seconds to McHale on the stage and a further 50 when he was late into the next time control.  The gap increased by another 8 seconds when the unsettled Coleman was slow over the next stage. Theories that the whole rally will be won or lost on Atlantic Drive began to gain some credence when McHale pulled into the Milford service area, his lead now extended to 2 minutes and 18 seconds.  Coleman, apart, there was hardly anyone who doubted that Austin had the rally in his pocket.

But what went wrong   from that point on – and why? – Was at the heart of the whole debate. Complacency,            miscalculation or shrewd tactics by Coleman and Morgan.  Perhaps a combination of all three. The facts of the matter were that McHale and co-driver Christy Farrell made a crucial error on the next three stages, which loop out over Knockalla, Fanad Head and Kindrum Lake.  Coleman lit the Porsche like we have never seen him do before, slashing 40 seconds off the gap, 20 of them taken back on Kindrum alone. McHale brushed it off, saying he had ‘fallen asleep’ on those stages, but in truth he did not know what times Coleman was producing, the Porsche’s crew having fallen back and deliberately ‘hiding’ from the leaders. The realization of the situation only became clear back at service again where Farrell at first said they had eased back, letting Billy take ’10 or 20 seconds’ from them. When he eventually saw Coleman’s times he was visibly shocked but the official word from the team was that all was well and still going to plan. However, it is now clear that Coleman had pulled a masterstroke, the result of which was better than even he could have hoped. McHale was now caught in a dilemma of trying to find a pace to preserve his dwindling lead and preserve his car.  A lead f 30 seconds at the end of the day would be enough to see him through to victory on Sunday, he maintained. It was negative thinking and an untypical defensive approach by McHale.  He seemed to ignore the basis on which his reputation had been built – attack is the best form of defense. Austin was certainly quicker round the Knockalla-Fanad-Kindrum loop the next time but another 1 7 seconds went from his lead and it might have been more if Coleman had not been slowed slightly when he caught the Ascona of Vincent Bonner limping towards the finish with a puncture. No matter, he had cut the 2 minute 18 second deficit by a full minute and the gap was failing much faster than McHale could afford.  Beneath a still calm exterior in the Opel camp, the alarm bells were starting to ring.  This was not going to be a cosy run home to the finish after all. McHale could no longer afford to play a tactical game.  He had to get back on the pipe and work that Manta to the limit. But still Billy kept coming – 10 seconds on the next stage, 6 on the next, 6 more again on the next, 7 more on the next and 4 on the final stage of the day.  The gap was down to 37 seconds. McHale’s claim that he needed just 30 seconds in front was about to be put to the test.  Sunday would not be a day for the fainthearted in either camp. The Sunday stages were said to be bumpy in the main and at least one had most of its surface eaten away by the hard winter.  A puncture might settle it but for both crews it was simply a matter of going as hard as both they and their machines could stand.  Eight stages to go and 37 seconds between them. Coleman needed close, to 5 seconds a stage; McHale had to stop him taking the time back.  Neither camp would have been prepared to place any bets on the outcome.  There was already a great deal at stake for both of them. For McHale a first victory over his old D0TI teammate, a chance to step out of the shadow of the acknowledged master. For Coleman a first win for the Rothmans team who had had little success in the British Isles since the late Henri Toivonen had departed for Lancia. Stage one on Sunday afternoon saw the Coleman charge continue with another 8 seconds trimmed off the lead, well within the required tar et.  Stage two brought 4 more and McHale’s situation was getting desperate.  The gap was now just 25 seconds.  Somehow he held the Porsche to just one second on the third stage but by the time they returned to service in Letterkenny the margin was down to 20 seconds exactly. The same loop of four stages was all that remained of the rally but already there were rumors that the final stage would not be run because of spectator problems.  Would the cancellation save McHale?  Deny Coleman victory?  If they were tied for the lead would Clerk of the Course Jim Callaghan have the nerve to call it off prematurely?

The tension had reached an almost unbearable level as the cars moved out from service for the last time, the Rothmans helicopter hovering overhead and tracking Billy’s every move. Perhaps Billy had heard the last stage cancellation rumors, too, for he literally flew over the Killydonnell stage, cutting what remained of McHale’s lead in half. Only 10 seconds between them and three stages left.  The odds were swinging heavily in Coleman’s favour.  But somehow McHale held him to 2 seconds on the next stage and it was back in the balance again, the Opel man maybe having the edge, the last stage was cancelled.  Then Austin made a mistake.  He overshot a junction and was forced to brake hard, the Opel losing all its momentum.  Coleman was 9 seconds faster and in front for the first time with one stage left.

If McHale still harboured any hopes of pulling victory out of the fire, still had not conceded defeat, then officialdom was about to declare Billy Coleman the winner. Word filtered back that the final stage had indeed been cancelled.  Some say there was never any intention of running it, knowing the dangers and congestion it would cause as every spectator in the county congregated for one last look. It was over. Coleman had won by the tiniest possible margin, the smallest in the history of international rallying. Yet there was no real sign of emotion from either driver. They sat in their cars, seemingly stunned and drained by their efforts.  Perhaps neither of them was prepared to accept that the battle had been won and lost. Even the spectators back at the finish ramp appeared unsure, disbelieving.  Their greeting for Coleman was low-key and half-hearted. Maybe they did not understand they had been witnessing the greatest ever performance ever seen in this country.

Certainty few of them could understand how Billy could have performed such a miracle, least of all the defeated McHale. Hindsight reveals that he had committed a serious error on Saturday afternoon by going too slowly.  But that apart he did almost nothing wrong and the simple facts of the matter are that McHale and the Opel were out-performed by Coleman and the Porsche. It was Bertie Fisher who said later ‘You have to hand it to Billy – he is a man you must never underestimate’.  McHale will never make the same mistake again. 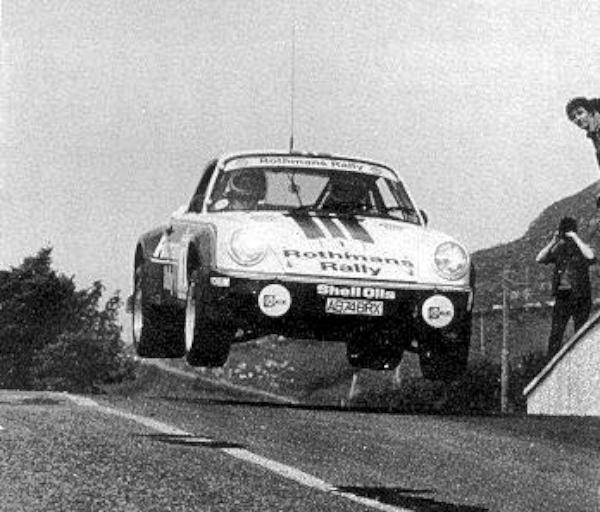