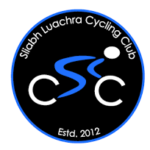 A busy month just passed for the Juveniles within the club. The Fermoy Cycling Club Hennessy League continues every Tuesday night and with the bi weekly Kerry County league the week nights are busy.

In addition Sunday races were attended in Carlow, Cavan, Mulytfarnam and Fermoy so all told a hectic schedule where the club bus has really showed its worth. Thanks to the Club Members and Parents who have helped out with the driving. In the Under 12 age group Nicholas Buckley, Sean P Fleming. Kianan Dennehy and Kate Murphy are racing well. In the Under 14 age group the performances of Aidan Morley, Darragh Dennehy, Dinny Murphy and Amy Fleming are all improving. Great to see Ciaran Finnegan back on the bike, completing the Ring of Kerry and racing competitively once again after an nasty fall in Beaufort last month. Ben Murphy (U16) raced with the adults (A3) as part of his national training in Fermoy and finished in the Top 10.

Well done to Knocknagree boys Denis O Connor and Dan Murphy who both completed the Junior Tour of Ireland last week. This is a gruelling six day stage race on the roads of Clare covering 550km and some of the most difficult climbing terrain the west of Ireland has to offer completing against strong European and USA Teams. No mean achievement to complete.