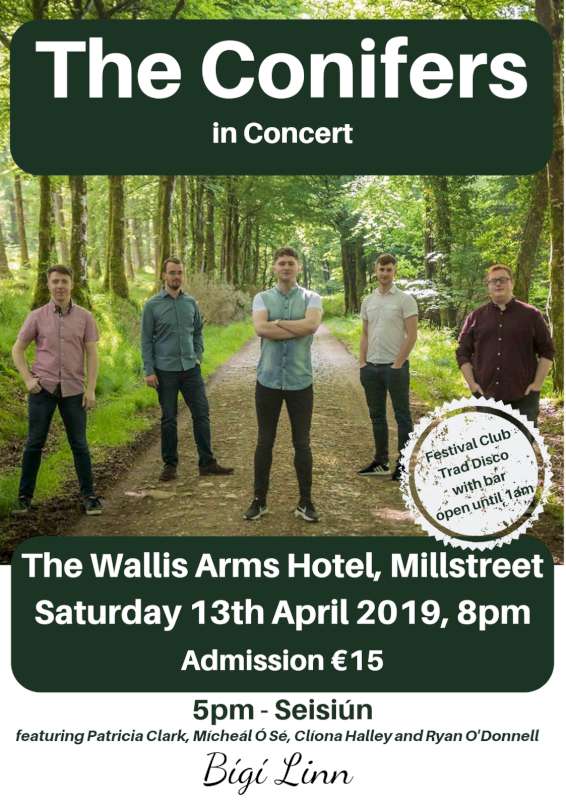 Saturday night promises to be a great night for the people of Millstreet and beyond.  The 3rd Millstreet Trad Festival is hosting an evening of entertainment in The Wallis Arms Hotel.  Four of the amazing teachers who will be delivering workshops at Millstreet Community School on Saturday morning will lead a music seisiún in the hotel starting at 5pm.  So, come along and soak up the great atmosphere.
Then at 8pm the headline act will be great new trad band “The Conifers”.  This is a great young band who’s line up includes Bryan O’Leary from Turreencahill.  Bryan is known locally as the grandson of the famous Johnny O’Leary – indeed well known to those who used to frequent Dan O’Connells in Knocknagree.  The concert promises to be fantastic with a mixture of music and song from the 5 members who come from all over Ireland.
But the fun doesn’t stop there.  The Wallis Arms is our festival hub, and the music will continue after the concert:  Those who wish to just hang out are very welcome, but there will also be a Trad Disco – young James Linehan will be the DJ for this first of a kind event for Millstreet in the back room of The Wallis Arms and – who knows – there could be a breakout of tunes in the front bar as well.
Admission to the concert is €15 which includes entry to the trad disco.  But, if you just want to arrive for the disco admission is a mere €5.  Come along and see what you think!!!