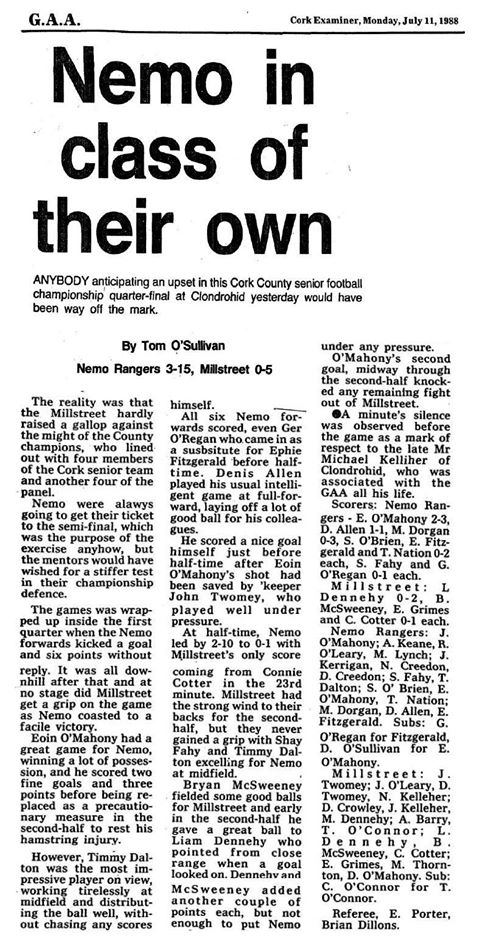 Nemo in a class of their own

Anybody anticipating an upset in this Cork County senior football championship quarter-final at Clondrohid yesterday would have been way off the mark.

The reality was that the Millstreet hardly raised a gallop against the might of the County champions, who lined out with four members of the Cork senior team and another four of the panel. Nemo were always going to get their ticket to the semi-final, which was the purpose of the exercise anyhow, but the mentors would have wished for a stiffer test in their championship defence. The games was wrapped up inside the first quarter when the Nemo forwards kicked a goal and six points without reply. It was all downhill after that and at no stage did Millstreet get a grip on the game as Nemo coasted to a facile victory. Eoin O’Mahony had a great game for Nemo, winning a lot of possession, and he scored two fine goals and three points before being replaced as a precautionary measure in the second-half to rest his hamstring injury. However, Timmy Dalton was the most impressive player on view, working tirelessly at midfield and distributing the ball well, without chasing any scores himself. All six Nemo for-wards scored, even Ger O’Regan who.came in as a substitute for Ephie Fitzgerald before half-time. Denis Allen played his usual intelligent game at full-forward, laying off a lot of good ball for his colleagues. He scored a nice goal himself just before half-time after Eoin O’Mahony’s shot had been saved by ‘keeper John Twomey, who played well under pressure. At half-time, Nemo led by 2-10 to 0-1 with Millstreet’s only score coming from Connie Cotter in the 23rd minute. Millstreet had the strong wind to their backs for the second-half, but they never gained a grip with Shay Fahy and Timmy Dalton excelling for Nemo at midfield. Bryan McSweeney fielded some good balls for Millstreet and early in the second-half he gave a great ball to Liam Dennehy who pointed from close range when a goal looked on. Dennehy and McSweeney added another couple of points each, but not enough to put Nemo under any pressure. O’Mahony’s second goal, midway through the second-half knock-ed any remaining fight out of Millstreet. A minute’s silence was observed before the game as a mark of respect to the late Mr Michael Kelliher of Clondrohid, who was associated with the GAA all his life. Scorers: Nemo Rangers – E. O’Mahony 2-3, D. Allen 1-1, M. Dorgan 0-3, S. O’Brien, E. Fitzgerald and T. Nation 0-2 each, S. Fahy and G. O’Regan 0-1 each.
Millstreet: L Dennehy 0-2, B. McSweeney, E. Grimes and C. Cotter 0-1 each.