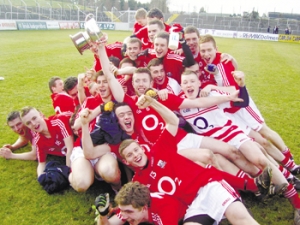 Millstreet’s Michael Vaughan won All Ireland with the Vocational Schools footballers last Saturday February 28th. Vaughan worked hard and played well throughout and notched up two points for his efforts as Cork edged out Monaghan on a scoreline of 3-8 to 2-7.

The match report below is from the Southern Star:

It was Cork’s second victory in the final against Monaghan in three seasons, but they had been ousted at the semi-final stage in 2009 by the Farney County students, who went on to replace them as champions.

With seven of last year’s side on board, Monaghan were always likely to be a hard nut to crack, and, trailing by 2-5 to 0-4 at the break, their bid to complete the two-in-a-row took on a rosy hue after they grabbed two goals within ten minutes of the second half.

Cork held their composure, however, and they got back on course after full forward Dean Murphy fisted a delivery by centre back Rory O’Sullivan to the net three minutes later.

O’Sullivan’s powerful play was instrumental in allowing Cork to regain the initiative, and the Argideen Rangers clubman, a member of this year’s county under-21 squad, certainly played a captain’s part at the heart of the Rebels rearguard. In essence, however, it was a gutsy team display which paved the way for Cork’s triumph.

In contrast to the semi-final against Meath, they set about their task with enthusiasm from the outset, gaining an early edge at midfield where Joe Collins and Kevin Hoare were both quick to settle.

Michael Vaughan, who opened the scoring in the third minute, was regularly involved too at wing forward, while Pa Cronin made a promising start on the 40, with the result that Cork’s inside line of attack was fairly generously serviced during the opening exchanges.

Mindful of the threat posed by Brian Hurley, the star of the win over Meath the previous weekend, Monaghan handed selected full back Eoghan Coyle the task of policing the Cork corner forward from the throw-in. He found it very difficult to keep Hurley in check, however, and by the end of the first half, the ace attacker had notched 1-1 from play.

Hurley’s goal came in the 11th minute after he had latched on a well-directed sideline kick by Dean Murphy, and it was soon followed by another from Pa Cronin, who, racing on to a pass from wing back Tomas Clancy, rattled the net with an excellent first-time strike.

That pushed Cork 2-1 to 0-1 ahead after 14 minutes, but they struggled to build on their bright start as Monaghan, with Pete Dooney making his presence felt following his move from the 40, enjoyed the better of matters at midfield in the second quarter.

While Michael Vaughan continued to work hard at wing forward for Cork, Monaghan stamped their authority as well in the half back line, but they seldom moved with any great conviction up front, and the fact that they failed to register a score from play before the break tells its own story.

Considering they clocked up seven wides, six more than Cork in the first half, Monaghan might have been closer at the interval.Brian Hurley completed an excellent move involving Tomas Clancy, Rory O’Sullivan, Joe Collins, Pa Cronin and Alan Gould with a sublime point from out near the right touchline, and Kevin Hoare chipped in with another good score to underline Cork’s more economical and enterprising play in the first half.

For the second half, Monaghan shoved wing back Cillian Coleman up to full forward, and the move brought results as he fisted in a goal which, preceded by another from the skilful Philip Donnelly, left them snapping at Cork’s heels with 20 minutes remaining.

The momentum was clearly with Monaghan at that juncture, but they were rocked back on their heels by Dean Murphy’s goal, while Rory O’Sullivan heroics at centre back served to lift the entire Cork team when the crunch came.

It was by no means plain sailing for Cork in the last quarter when their defence, in which Tomas Clancy, Padraig Crowley, Jeremy Ryan, Sean O’Shea and Derek Crowley all paid their way in front of dependable ’keeper Jamie Crowley, again did well to limit Monaghan’s progress.

At the other end, Michael Vaughan, Mark Howard – who, along with Sean Ryan, was sprung from the bench to good effect – and Dara Ring shared three points in the third quarter to ensure that Cork remained in front until the finish.

Afterwards team coach Hughie Murphy paid tribute to the character shown by his charges after they were hit by a brace of goals early in the second half.

“We said at half-time that we couldn’t afford to concede a goal, because Monaghan had huge support, and there was every chance they would drive on if they got back into the game. As it happened, Monaghan scored two to bring the lead down to a point, but, in fairness to the lads, they didn’t panic, they raised the tempo again, and they got the reward they deserved in the end.”