I am a rambling hero
And by love I am ensnared,
Near to the town of Millstreet,
There dwells a comely maid,
She’s fairer than fair Erin,
And she’s free from earthly pride.
This comely maid’s dwelling place
Is down by the Tanyard side.

For seven long years we walked together
Until we did agree
But for her parents
‘Tis married we would be.
To me they proved unkind
Which causes me to cross the tide
And to leave my love behind
Down by the Tanyard Side.

Farewell to friends and neighbours
To this world I bid adieu
I am going to cross the Atlantic
In search of something new
But if ever I chance to return again
I will make this maid my bride
And we will live happily
Down by the Tanyard Side.

– Composed by a Mr. Aherne, a native of Millstreet about a Miss Barrett who lived in the Tanyard in the town of Millstreet some fifty years ago (1880’s). Aherne never (again) returned to Ireland.

====
DOWN BY THE TANYARD SIDE was originally composed by celebrated songwriter Ned Lysaght (1763–1809) to console his friend Hugh Byrne who was the victim of his sweetheart’s cruel father. There are many variants of it, as is the one by Ahern above. Listen to one of those variants below sung by Seán O’Sé.

There’s a version of this song, recited in Carriganima in 1983 which starts at 17:30 in the below video from LTV2. (Anyone know who recited it?)

The Tanyard in Millstreet (as elsewhere) so go its name because it was the site of a tanning yard,  which was located at the back of Bryde’s Cottage (where 367 is written on the map below)

Tanning is the process of treating skins and hides of animals to produce leather, which is more durable and less susceptible to decomposition.

In 1832, Mr Finn and his son were the tanners at that location:

… It appeared from the evidence of … Peace-Constable Skiffington, Master Finn, son to a Tanner in Mill-street, and from that of the latters servant man … …  It also appeared that the hide and horns, branded and marked in particular way, were sold at Mr. Finn’s Tan-yard, in Mil-street, on the same Saturday. During the examination of the above named witnesses, nothing transpired to implicate llw prisoners in the transaction before us … [Saunders’s Newsletter – Tuesday 10 January 1832] 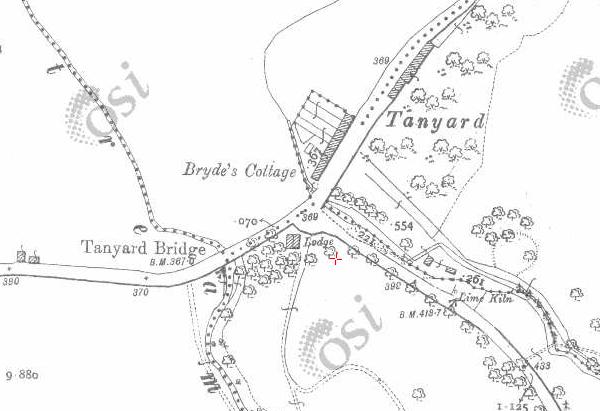 “There was a tan-yard in Millstreet any any amount of shoemakers worked there. The people from miles around got their boots at Millstreet. Some of the Millstreet shoemakers visited the fairs in the district took the measure of those requiring boots, made them in their own workshops and supplied them the following fairday”