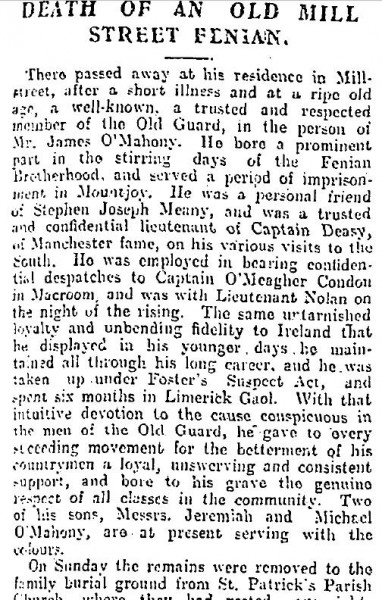 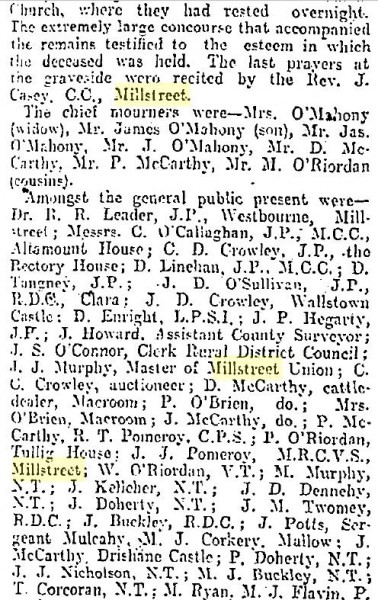 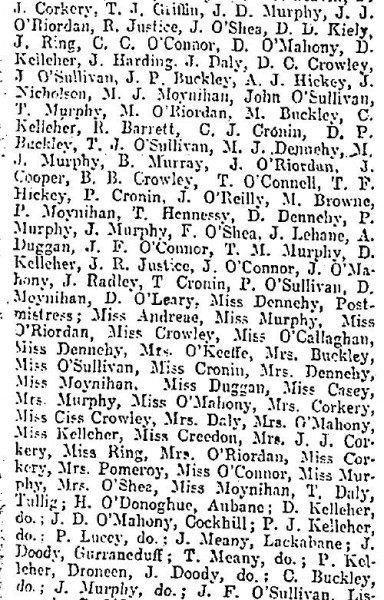 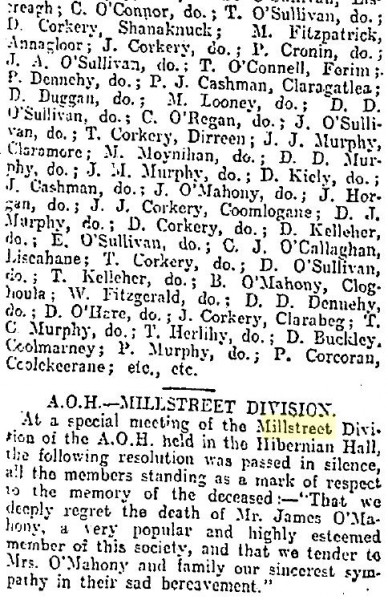 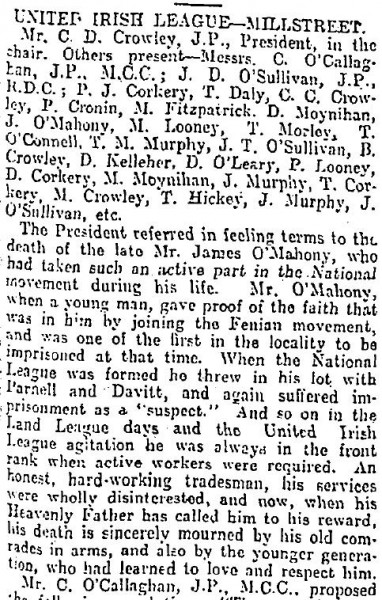 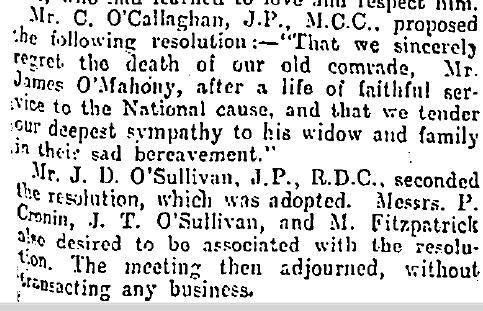 – from the Cork Examiner April 1914 (the article is transcribed below)

James Mahony from Millstreet and Maria Riordan from Mushera were married on July 16th 1867 [parish register] [original parish register (above)]. (Their parents were Daniel Mahony + H Keliher, and Dermot Riordan + M Keliher). They had a family of at least ten children who were:

In the 1911 Census they seemm to have moved to Upper Mill Lane [ref: 1911 Census] The census also says that they had 10 children, of which 9 were surviving. I’m pretty sure that it was Anne that died as an infant.

TODO: His sons Jeremiah and Michael took part in WWI – add  links to the articles on them when published

This is the transcription of the newspaper article from 1916

DEATH OF AN OLD MILLSTREET FENIAN.

There passed away at his residence in MillStreet, after a short illness and at a ripe old age, a well-known, a trusted and respected member of the Old Guard, in the person of Mr. James O’Mahony. He bore a prominent part in the stirring days of the Fenian brotherhood, and served a period of imprisonment in Mountjoy. He was a personal friend of Stephen Joseph Meaney, and was a trusted and confidential lieutenant of Captain Deasy, of Manchester fame, on his various visits to the South. He was employed in bearing confidential despatches to Captain O’Meagher Condon in Macroom, and was with Lieutenant Nolan on the night of the rising. The same urtarnislied loyally and unbending fidelity to Ireland that he displayed in his younger days, he maintained all through his long career, and he was taken up under Foster’s Suspect Act, and spent six months in Limerick Gaol. With that intuitve devotion to the cause conspicuous in the men of the Old Guard , he gave to overy steeding movement, for the betterment of his countrymen a loyal, unswerving and consistent support, and bore to his grave the genuine respect of all classes in the community. Two of his sons, Messrs Jeremiah and Michael O’Mahony are at present serving with the webours (???)

A.O.H MILLSTREET DIVISION
At a special meeting of the Millstreet Division, of the AOH held in the Hibernian Hall, the following resolution was passed in silence, all the members standing as a mark of respect to the memory of the deceased :- ‘That we deeply regret the death of Mr. James O’Mahony, a very popular and highly esteemed member of this society, and that we tender to Mrs. O’Mahony and family our sincerest sympathy in their sad bereavemnet.”

The AOH Hibernian Hall was located at Minor Row, where the road into SuperValu is now located.

– It’s interesting that J McCarthy’s address is given as Drishane Castle (update 7th Aug: this is a different McCarthy to that of the castle, he was the farm stewart (farm manager) for the nuns in drishane. He was originally from Cork. Other stewarts in Drishane were Mick McCarthy, Johnny Hayes, others, and the last one was Liam Flynn (thanks to tadgh for this info))

This information about him probably when he was a fenian

note: there is also a photo of him when he was imprisoned as a Fenian

NOTE: TODO: When this article was written first, it was believed that James O’Mahony was of the Hardware shop at West End. This was incorrect!!!! He was from Mill Lane and not West End.