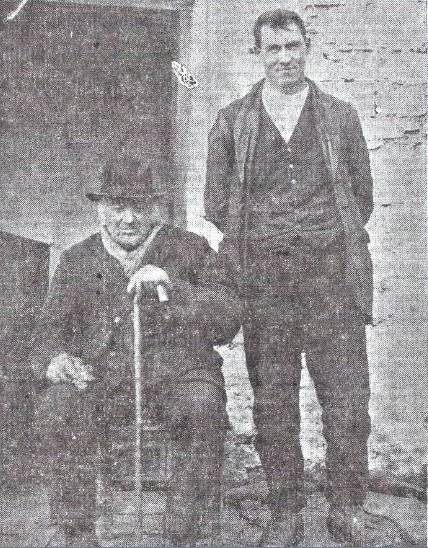 A photograph taken at the home of Daniel Kelleher, Carrigacooleen, Millstreet, Co. Cork (seated), who has every expectation of reaching the great age of 100 years in June next. With him is his grandson. Mr. Kelleher is hale and hearty. He is in excellent possession of all his faculties. He has no special recipe for longevity and is neither averse to alcoholic refreshment in moderation or to the companionable influences of tobacco. He has a rich store of folklore, is a fluent Irish speaker, and, should be a valuable asset to those interested in the collection of first-hand information regarding the events of the past 80 years or more. For instance, he has a vivid recollection of the great Irish famine and relates how he saw the people of that period eat nettles and only sorry not to have enough of them to ward off the pangs of hunger. There were years came after black ’47 every bit as bad, he says but sickness and hunger came together in that year. He recollects having seen the Liberator pass along the road near his home on one occasion, and he has a particular recollection of the peculiar kind of cap worn by O’Connell. The stage coach from Cork to Tralee regularly passed his house. Modem transport he regards as quite an improvement on that of his young days but, he added in this connection, “the young people now are gone foolish entirely”. Mr. Kelleher goes regularly to Macroom, some four miles away. He likes to visit the town now and again. He is quite active for his years, walks about unaided and takes a keen interest in the events of the times. [Irish Examiner Wednesday, February 25, 1931]

Alas, he never reached a hundred years. Two weeks later he passed away: