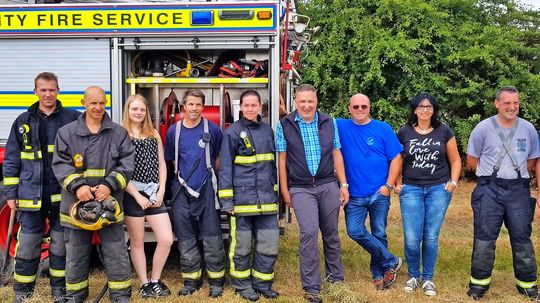 “What happened to four holidaymakers from Landsweiler recently on their trip through Ireland has nothing to do with recreation. It started on Thursday a week ago: Bernhard and Christine Schäfer were going with their daughter and buddy Markus Schorr happily through the area around the Irish town of Millstreet, when they discovered an “incredibly large smoke column”. As all four were members of the fire department in Landsweiler, they know immediately what to do: “We have circled the pillar of smoke and saw that a large mountain of hay was burning in a field,” says Bernhard Schäfer. Clear case: The fire department must be alerted…

“That was fun, with extended knowledge of English,” laughs Schäfer, adding that in Ireland, due to the prolonged drought, people now speak of the brown instead of the green island. So there was a big rush.

“When the fire department came, five emergency services got out of the fire engine. Because of the size of the fire, everyone quickly came to their limits. “For the four holidaymakers it is immediately clear: Here, support is needed. So all four of them join in. Shepherd took the Irish Guardsman by the hand when extinguishing them, the others are equipped with shovels to knock out fires and embers. “The fire threatened to spread to another field,” says Schäfer. By joining forces, however, it was possible to extinguish the fire within half an hour. “That just worked out well. Everything went hand in hand, without much discussion. Everyone knew what to do. “ 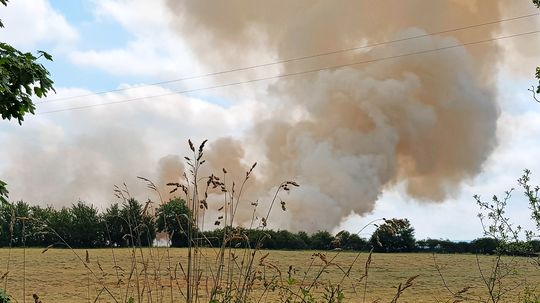 Not only the Irish firefighters are grateful for the support from Landsweiler speeches, but also the farmers who have arrived by now. “You have thanked us 1000 times and invited us to tea time. We sat together for an hour and experienced unbelievable warmth, “remembers Schäfer.

So far, so unusual. But the holiday was not over yet. Two days later, the four were driving on a scenic road near Cork when they witnessed a daring overtaking manoeuver. As a result, several cars have to lay down an emergency stop, which causes a motorcyclist to skid and crash. The holidaymakers in action want to provide immediate first aid and state, “that in Ireland, apparently, neither a warning triangle nor a first aid kit must have it.” Good that shepherd always has a small first aid bag for hiking. Thanks to this, the motorcyclist – “shock, laceration, presumably broken shoulder joint” – be supplied. An ambulance, travelling because of a cycling event, took the man with him. But now there are about 1000 cyclists on the way to the blind accident site, which is not dangerous. So the four tourists stand on the street and regulate the traffic until the arrival of the gardai. “It pleased the two officers so much that they quickly gave us their warning jackets and asked if we could continue. So we stood for almost an hour as ‘auxiliary guards’ on the N22 at Kilgarven. “The Irish police officers were incredibly grateful for the support from Germany.

A day later, the journey home to Landsweiler. “Thank God. Who knows what else would have happened? “Laughs Schäfer.”