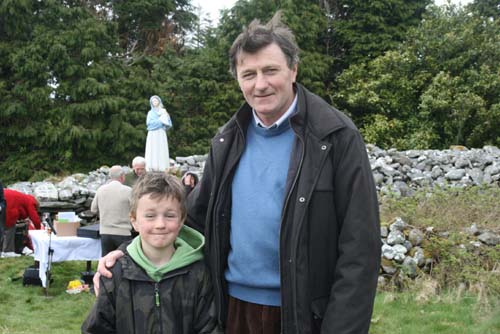 On a very busy weekend we recorded quite a few events to share on our website. We had the visit to Millstreet on Saturday by participants from the Rally of the Lakes (with an excellent and much praised service centre at Green Glens). On Monday we had the very successful Cloghoula N.S. Sports Day. But we begin our sharing with an annual event at Shrone near Rathmore in the sacred setting known as “The City”. Seán Murphy, Brendan Murphy and I arranged to record and to transmit (almost live) the celebration of Mass which took place at 2.00 p.m. on Sunday and by 5.03 p.m. Seán Murphy had the completed recording ready for Dan Joe Kelleher in Carriganima for broadcast to thousands of appreciative viewers. Mass was celebrated by Fr. Larry Kelly who ministers in Rathmore. The historic oil truck we noted in Rathmore village on our way home. Later in the week we shall have pics. of the Rally and Cloghoula Sports.
See all the photos below (by Seán Radley for www.millstreet.ie and LTV2 Millstreet)

Cathair Chrobhdhearg : (The City of Shrone) Rathmore: At the foot of the twin mountains “Da Chich Danann”. Historians agree this was one of the first location in Ireland to be populated, it was here on this elevated site that the Tuatha De Danann had their base naming the mountains “Da Chich Danann” (The breasts of Dana, but known locally as “The Paps”). It is one of the most ancient, historical and interesting religious sites in the entire western world which has continued its unbroken tradition of worship since its foundation as a Pagan site. A circular stone wall of 3 meters high encloses it. The Mayday festival is now a Christianised event of prayer and recital, with “cures” still taken from the City’s stones. Much of the original circular stone wall was destroyed by traders who used the stones to hold down their tents.

11 thoughts on “The City Mass”