Congratulations to Tony O’ Brien Master Butchers, Minor Row, who recently won two awards for their sausages at the Commanderie des Fins Goustiers du Duché d’Alençon (the top European awards for sausages and puddings, which is held in France each year). The awards were for Best Creative Sausage for the UK & Ireland 2015, and Grand Prix D’honneur for their Grilled Pork Sausage. (photos thanks to Tom of TMC Photography) 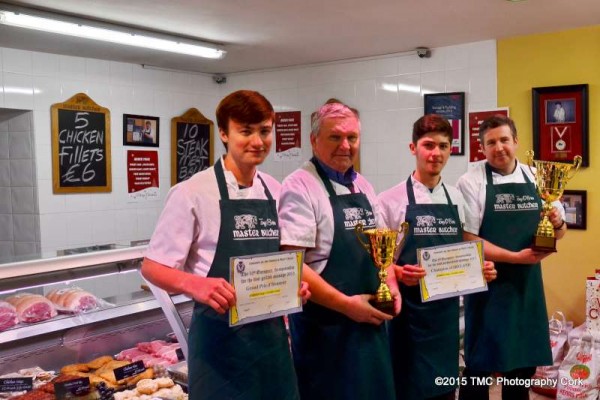 END_OF_DOCUMENT_TOKEN_TO_BE_REPLACED

Millstreet had two winners at the recent Sausage & Pudding Championships with O’Leary’s Family Butchers in the Square winning a Gold medal in the Traditional Sausage section, and O’Brien’s Craft Butcher from Minor Row winning a Silver Medal also in the Traditional Sausage. They had previously been successful in the regional competitions (Southern Region) which qualified them for the finals. All the medals won are detailed below. The Corkman also had an article on their successes:

He demonstrated that the very important attribute of consistency forms part of his reputation for quality, by hitting the top spot at the award ceremony. Having given a strong performance at regional level with three gold medals, Mr O’Leary’s produce was recognised and awarded by the presiding judges.