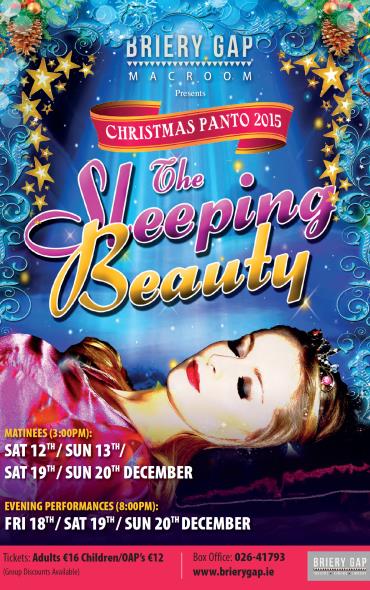 Briery Gap are delighted to announce Christmas Pantomime 2015 “The Sleeping Beauty” from Saturday, December 12th. This is the first time this well-loved fairy-tale has been staged at Briery Gap and celebrates their 16th Panto Production with a cast and chorus of over 120 talented adults and children.

Steeped with humour, music and a sprinkle of romance, this year’s Panto features all the traditional characters of the story with a few surprises sure to entertain anyone that believes in a little magic at Christmas time!

Don’t miss the most magical fairy-tale in the land at Briery Gap, Macroom this Christmas season! To book, contact Briery Gap Box Office on 026-41793, or see brierygap.ie for further information.