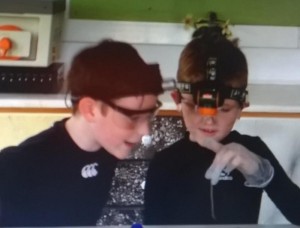 Congratulations to two local boys, Jack O’ Riordan aged 6 from Boherbue NS and Adam Keane aged 9 from Lismire NS, who are through to the finals on RTE’s bug-finding series Shutterbugs!

Jack and Adam produced a video reel for the final over the weekend at Duarriglewoods, Brookpark Kilcorney and Millstreet Country Park. Earthworms, Ants and Red Deers was their challenge which they completed and recorded findings at Millstreet Country Park’s lab with Philip Cremin their tour guide on the day.

Producer from RTE Ciara Baker congratulated the boys on their fantastic production.

The  Shutterbugs page with videos is located at rte.ie/rtejr/shutterbugs