The remains of the Church have deteriorated extensively over the years and more-so- over the last few years, to such an extent that part of the front wall recently collapsed and there was a danger of other parts collapsing. The Chairman of the Cemeteries group, along with other members, brought it to the attention of the relevant bodies, and for a while it looked like it would have to be demolished completely in the interest of health and safety. But due to the intervention of the Board of Works and Cork Co. Council, and in particular Billy Dennehy and Paul Curtin…. Funding has been secured and the Church will be saved, along with all the history attached to it. The work will be ongoing for the next few years, and will be subject to funds being made available, so fingers crossed, but at least it won’t be demolished. There may be a bit of inconvenience to people visiting the Cemetery to pay respect to their loved ones.    But please bear with us. It will be worth it in the end.        The very painstaking work is carried out by Sheehan’s Stone Works – Restoration & Conservation. Historical Buildings. 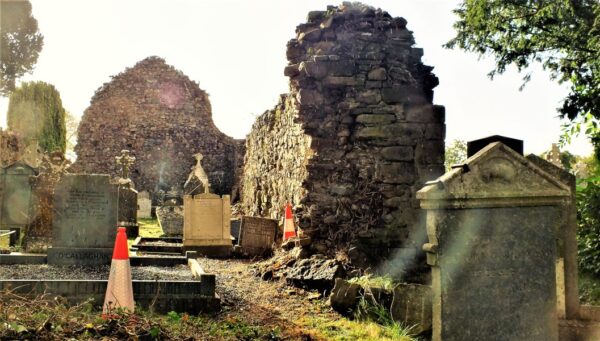