“These were just some of the many people who assisted in the organising of the mini festival which was run in conjunction with the big fight (Collins v Eubank in 1995)  in Green Glens and who also assisted as stewards on the night.”

The photo is in Millstreet Museum. Anyone hazard a guess at the names?  END_OF_DOCUMENT_TOKEN_TO_BE_REPLACED

END_OF_DOCUMENT_TOKEN_TO_BE_REPLACED

It’s twenty years ago the other day when Collins V Eubank was in the Green Glens Millstreet! Here is David Barrett who fought in Madison Square Garden on March 14th last and won! beside the poster! – photo thanks to Tom of TMC Photography. 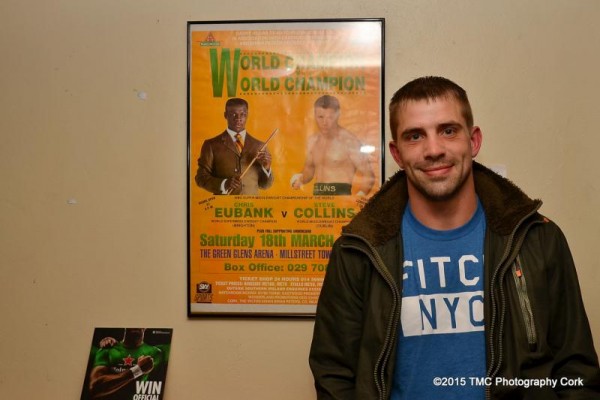 END_OF_DOCUMENT_TOKEN_TO_BE_REPLACED

Collins had enlisted the help of well known guru Tony Quinn, and they led the press to believe that Collins would be END_OF_DOCUMENT_TOKEN_TO_BE_REPLACED

O’Flynn Medical Announces its Largest Expansion: Tadhg O’Flynn speaks of their recent successes in the health industry which will ensure the long-term viability of O’Flynn Medical … (oflynnmedical.com 20th Nov)

Shine a spotlight on women in sport: Joanne O’Riordan enthuses about the Cork Ladies Football team’s All Ireland, but laments the lack of coverage for ladies sport in the media … (Irish Examiner 18th Nov)

Boxing: British Face-Off #7: Eubane v Collins: Chris Eubank talks about how Steve Collins got inside his head before the Millstreet bout back in 1995 (video) … (SkySports.com 16th Nov)

In the Holly Bough: Niall and Conor Moynihan appear in this years Cork HollyBough (16th Nov 2013)

Text threats to gardaí case dismissed: Garda Andy McCarthy, who was based in Millstreet, received a text which stated that he and a colleague would be shot. Gardaí investigated but failed to provide evidence the texts were sent within the State … (Irish Examiner – 14th Nov)

There’s lots of talk at the minute about Steve Collins coming out of his boxing retirement. He will forever be remembered in Millstreet for his fight with Chris Eubank. Below is the video of that full boxing match from March 18th 1995:

END_OF_DOCUMENT_TOKEN_TO_BE_REPLACED

We had been waiting for news of upcoming boxing at the Green Glens arena, and this morning’s Examiner confirms the news:

“BIG-TIME boxing returns to the Green Glens Arena in Millstreet on December 10 when Rylane Boxing Club combine with the Garda Boxing Club to stage a show that will be built around the annual visit of the NYPD to box a Garda selection.

It was at the Green Glens that Steve Collins stripped Chris Eubank of his WBO world super middleweight title and, after confirming his superiority over the former END_OF_DOCUMENT_TOKEN_TO_BE_REPLACED

In yesterdays Irish Times, there was an article about the Eubank v Collins boxing match in 1994. For anyone that was there, it was probably the best night in the Green Glens in the last 20 years.

TOM HUMPHRIES watched as Chris Eubank arrived on a Harley Davidson but left Millstreet on a tumbril
CLAP CLAP Clap clap clap. Clap clap clap clap. STEVO!
The corrugated roofing of the byre in Millstreet echoed with the rolling thunder which hailed the new super middleweight champion of the world. Mr Steve Collins from Annamoe Terrace in Cabra. All hail.
Millstreet on Saturday night. Seldom can the exotic Chris Eubank from Brighton in England have tasted a stranger or more alien environment.
Travelling with his customary blaze of pomp and circumstance to a small, rural Irish town which reeked of burgers and frying onions; through the homely mess of buildings that is the Millstreet complex, past the rows of thoroughbred horses blinking inscrutably over their half doors, and into the arena where an 8,000 crowd, frenzied with excitement is passing a demented Mexican wave around the place.

Read the full article here on the Irish Times.