On Sunday afternoon, 29th Nov. 2020, a very impressive Historical Reenactment Group having travelled from the Kilmichael Site visited Millstreet to pay tribute at Mill Lane to the memory of Captain Paddy McCarthy the centenary of whose death in 1920 occurs about this time.  A superbly dignified ceremony took place by the Group who came from Cork City and County.   Following an uplifting introduction the Proclamation was read with great feeling.   Appropriate prayers were recited.   Seán Ó Cróinín from Cork City delivered an excellent speech regarding the life and death of Captain Paddy McCarthy.   A gentleman with beautiful native Irish sang in a magnificent manner “Mo Ghile Mear” and “Amhrán na bhFiann”.  The Organisers recognised that due to COVID-19 the event could not be advertised but hoped that in time to come a much bigger Tribute Event could take place with a far bigger attendance – at a time when COVID-19 will be a memory.   Here we share a selection of images from Sunday’s event and we thank Seán Ó Cróinín for sharing two images recorded at Kilmichael over the weekend.  (S.R.) 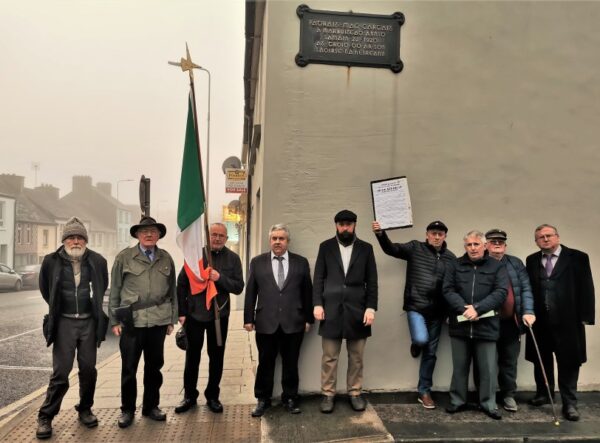 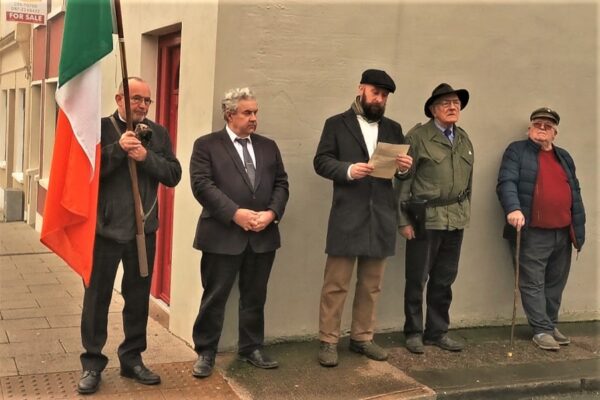 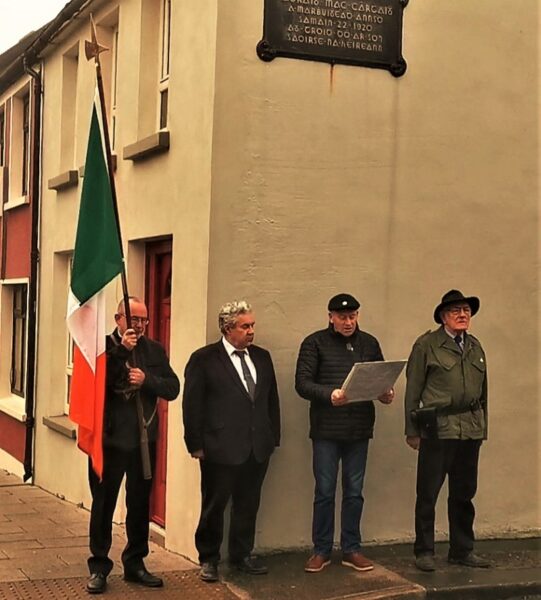 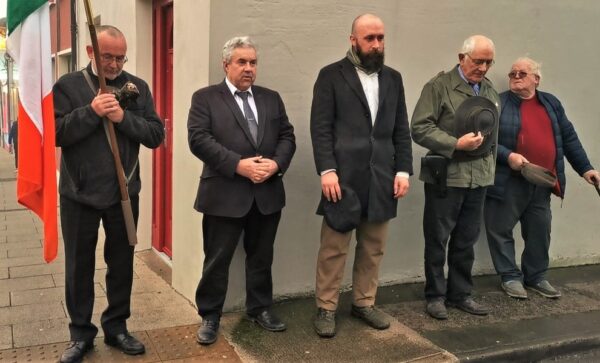 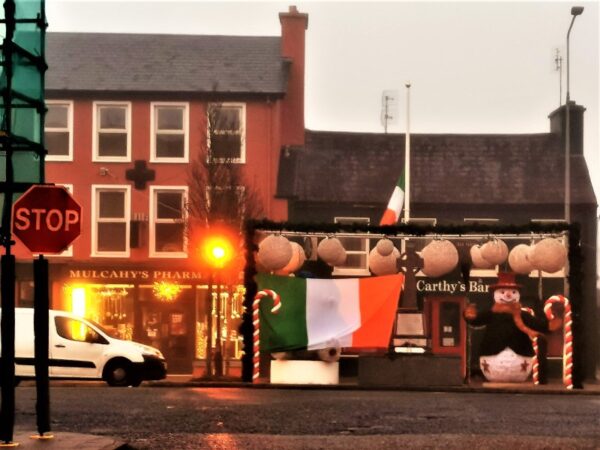 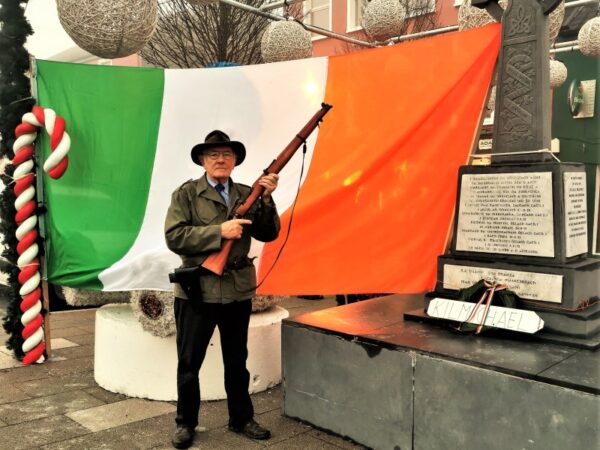 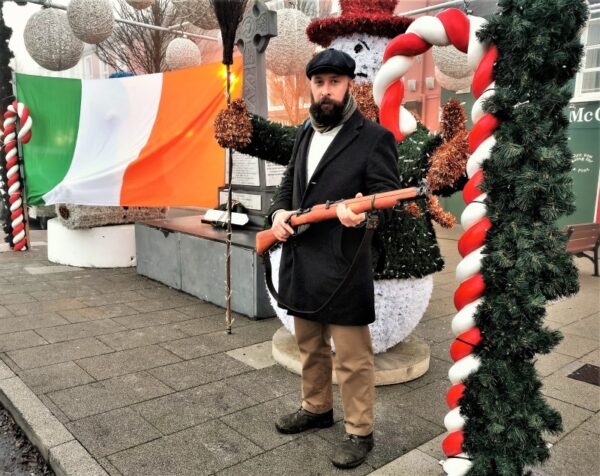 END_OF_DOCUMENT_TOKEN_TO_BE_REPLACED

We are most grateful to Seáno Murphy of Knocknagree and formerly of Mill Lane, Millstreet for sharing a very important memory and two historic images relevant to the recent Centenary Commemoration of the death of Captain Paddy McCarthy at Mill Lane on 22nd Nov. 1920.  Seáno writes:

“Seán, in keeping with your report on Paddy McCarthy’s death I have to mention the story my mother Katty Dineen told me about the night he was shot by the side of Lena and Agnes Dennehy’s house.   She (my mother) and her mother moved three doors down to Neily Hickey’s garage for safety.   Paddy’s body was brought down and laid in front of mother’s window where he died the following morning.   My mother had to wash away his blood from under the window.   I am sending two photos to illustrate the exact location of that very window where he died and also of the  back of Lena Dennehy’s house where he was shot.” 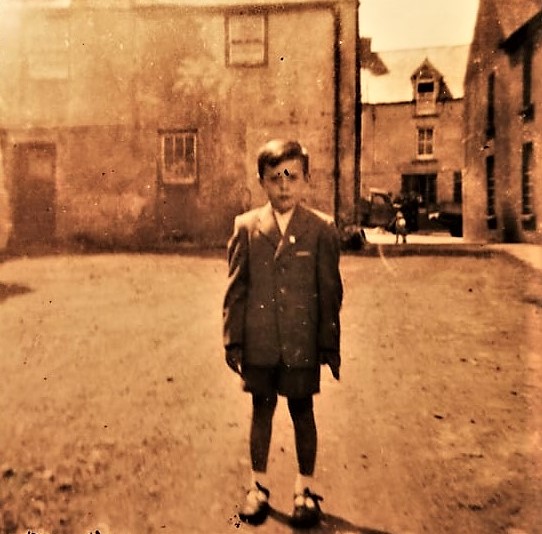 An image from the 1950s showing Seán Casey of Cloghoula taken in Mill Lane with Lena Dennehy’s house in the background outside which Captain Paddy McCarthy was shot. At that time the entrance to Mill Lane from Main Street was much narrower. Tap on the image to enlarge. (S.R.)

On this Sunday morning, 22nd November 2020 a special Committee assembled at Mill Lane, Millstreet to commemorate the late Captain Paddy McCarthy – a native of Meelin – who lost his life on this exact date one hundred years ago at Mill Lane.   A wreath was placed by Tim Murphy and a prayer was recited to honour the hero of the War of Independence.   Here we share a selection of images including a picture of the permanent plaque at the entrance of Mill Lane.   Tap on the images to enlarge.  A feature on the “Corkman” by John Tarrant will appear shortly. (S.R.) 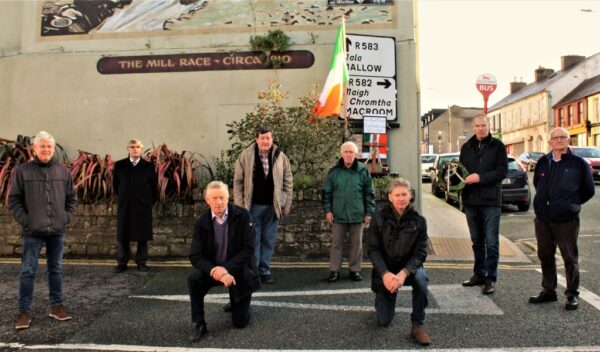 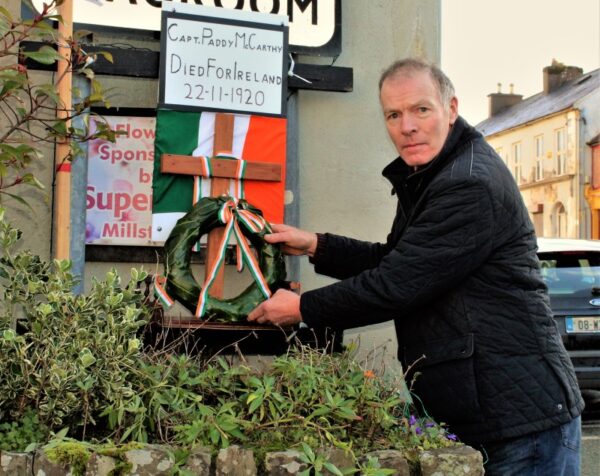 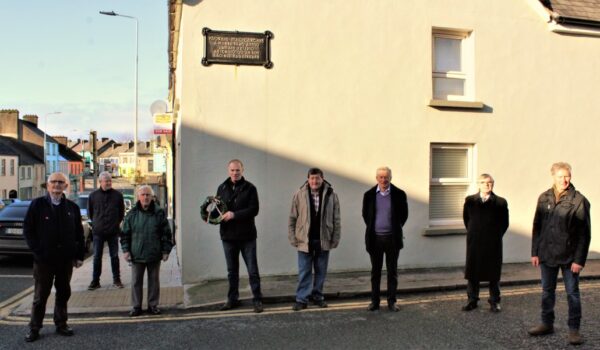 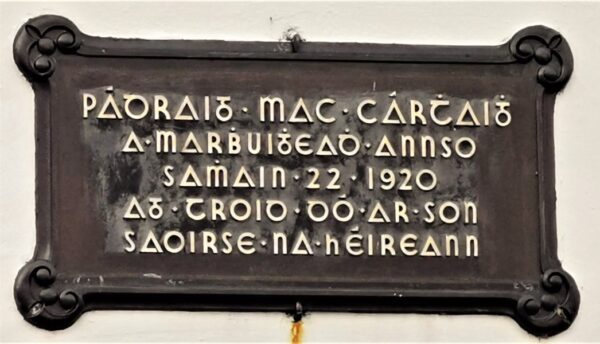 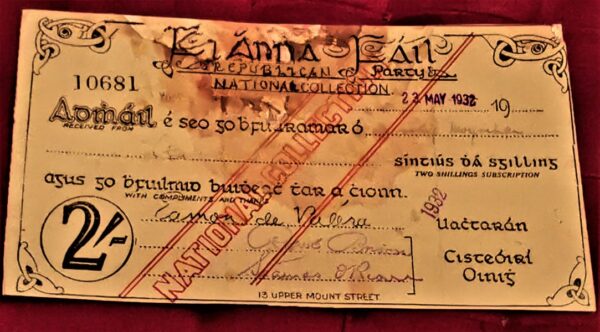