Without doubt, this has been the most successful season ever for double winning Rathcoole Rovers. This memorable year they managed to do what they had been trying to do for the past 8 seasons and went and won 1A.

For Rathcoole home form was a major factor, along with a few wins on the road. Every member of the squad played his part but special mention though for top goalscorer Tadhg Browne, who in a fine season, bagged 33 goals in total, 23 of them in the league.

END_OF_DOCUMENT_TOKEN_TO_BE_REPLACED 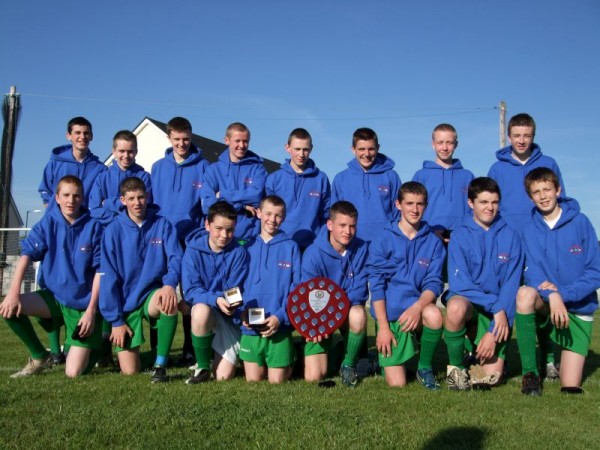 Rathcoole Rovers U14 Won the Cork Schoolboys League Division 3 2008-2009 League title. They improved as the year went on and thoroughly deserved the win with a record of Played 14, Won 12, drawn 1, lost 1, scored 55, conceded only 8 goals. The next season will see them in division 2, where opposition will be stronger, but hopefully they will continue to improve.

Keim collected 3 points this Sunday in a close affair. Kilford had the better of the 1st half and took the lead halfway through. Keim were unlucky not to score through Ciaran Patton who went close with a shot.

In the 2nd half Keim started to control the game with good passing and Alan Burton, James Broxton, Ger Lenihan all had efforts saved. Neil Corkery was fouled just outside the box and he picked himself up to take the free kick and dispatch it to the net. With 15 minutes remaining Keim piled on the pressure and Kieran Murphy had an effort well saved. With time running out James Broxton put a ball into the Kilford box and the clearance fell to Finbarr O’Riordan who found the net with a shot that went in off the post. Keim finished out the final minutes to collect the points.

Two games, two wins for a Rathcoole side jus t hitting top form. Unfortunately attention had to be turned away from the league and towards A.O.H cup matters with Watergrasshill the visitors to a bitterly cold Cooney Park on Sunday last.

A David vs. Goliath tag was hardly justified but with a division separating the sides, it seemed the odds were firmly stacked against Coole who entered the game with a somewhat under strength team. Injury and illness prevented the services of first choice midfield pairing, David Bourke and Paddy Daly. Not to mention top scorer Finbarr Cleary.

Despite the supposed difference in quality, the game played out as if any other division 3 league encounter. The only real difference between the sides being “Hills” ability to counter attack at speed. But with Rathcoole taking the more direct root, supplying Jonathan O Leary and Darren Kelleher with good quick ball, it seemed the visitors defense were struggling to cope with such an approach.

But mid way through the first half Coole were coming off a solid ten minutes of sustained pressure, even a succession of four straight corner kicks saw the home side end with nothing if only a psychological advantage. But this was too soon change as hill made another trade mark break up the pitch, eventually leaving keeper Brian Cooper stranded in a one on one situation , yet it still took a twenty yard cracker to break the deadlock.

The end to end football continued into the second half with the visitors just about maintaining their advantage with the defense now getting to grips with the threat posed by Leary and Kelleher. But in truth this really was an error ridden game, perhaps only redeemed by some excellent goalkeeping from both custodians. One nil the final score, with neither side looking like breaching the others rearguard.

Certainly a game which won’t live long in the memory, or will it be looked upon as a missed opportunity. Alfie Cooney’s men will certainly be keeping the league as the main focus of attention. Let’s just hope Sundays defeat won’t put a damper upon the recent run of results in the league. A decent performance against a solid division 2 side should give “Coole” plenty of confidences going into next weeks encounter with Gratten F.C. And with players returning from injuries and absences, there is no apparent reason for not collecting another three points.