END_OF_DOCUMENT_TOKEN_TO_BE_REPLACED

Áine Collins TD has organised A Community Forum which will be held in the Wallis Arms Hotel on Monday 5th March 2012 at 7.30pm.  IRD will also do a short presentation on available funding on the night.
Representatives from all Community Organisation are welcome.

From 8 to 9 p.m. this evening on Cork Music Station – the new online radio station established by Cullen’s William Fitzgerald and his son, John – I have the privilege of joining the team of DJs who dedicatedly broadcast the very best of Country-and-Western and Irish music on a nightly basis.   I’ve entitled my hour-long programme “Radio Treasures” where I shall be attempting to share some musical gems, local recordings intermixed with some chat and meeting a Studio Guest.   This first broadcast will include a song sung by John Walsh about the Titanic Survivor, Danny Buckley which we recorded in Boherbue on last Friday night at the official launch of Mike & Leo Fitzgerald’s superb DVD entitled “The Story of Titanic Survivor Danny Buckley 1890 – 1918”.   Lots of other items also which will hopefully make for an interesting radio experience.   Do have a listen to this live broadcast or even part of it if you have time to do so.   Simply log into www.millstreet.ie and click on the Link  entitled Cork Music Station on the right (one needs to scroll down) of the homepage…and there you are in tune with www.corkmusicstation.com – Happy listening!   (S.R.)

Notice anything special about today’s date?

Millstreet Parish have organised a series of three talks to mark the season of Lent. They will take place on Monday nights in Millstreet Community School library at 8pm, beginning on 27th February. The overall theme of the talks is ‘Compassion’ and they will be delivered by three highly regarded speakers, Fr. Peter McVerry SJ, Dr. Patricia Kieran, and Mr. Justin Kilcullen. Each talk will conclude with the chance to ask questions and some light refreshments.The first talk will take place on Monday 27th February. Fr. Peter McVerry SJ will speak about ‘Jesus the Compassionate One’.

Fr. McVerry grew up in Newry, Co. Down. In 1962, he entered the Jesuit Order and was ordained in 1975. He worked as a priest in the Inner City in Dublin from 1975 to 1980 and there he encountered some homeless children. He opened a hostel for homeless children in 1979 and this subsequently became his life-time work. He moved to Ballymun in 1980 and END_OF_DOCUMENT_TOKEN_TO_BE_REPLACED

IRD Duhallow is currently organising an Internet and Email Training Course which will commence on the 1st of March and will run one night a week for seven weeks in the James O’ Keeffe Institute, Newmarket from 7p.m. to 9p.m. The module is designed to provide learners with the necessary skills and knowledge required to access a website, use a web browser, access web addresses, search engines, email, Internet Security, Social Networking etc. will also be covered. Only a very basic knowledge of computers is required from participants. The total course cost per participant is €30. If you are interested in participating or require further information please contact Mary McHugh on 029 60633. Please note that places on this course are limited. 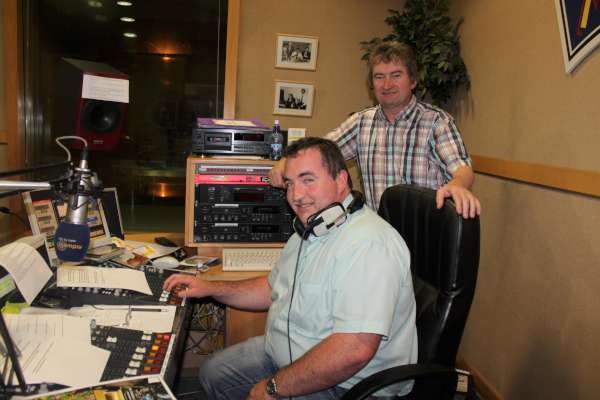 Pictured with the renowned DJ and “Farmers Journal” journalist, Michael Commins – Cullen’s William Fitzgerald takes over the radio controls in the ultra-modern Midwest Radio Studio in Co. Mayo during the Summer of 2011. DJ William and son, John have just established a superb new Internet Radio Station. We very much encourage you to visit the website for the very best of Country-and-Western and Irish music (almost non-stop!). The website is corkmusicstation.com and you may contact the station through its very own chatroom or by emailing <email>. Full details are on its website – We wish the brand new Internet Radio Station the very best of luck and every success. Happy Listening! (S.R.)

Superbly singing “The Green Glens of Antrim” on Monday in Mallow, Loretto O’Connor, Knocknagurrane, Cullen has succeeded in winning through to the Semi-Final of the highly prestigious Over-60s Competition

in Cork on 15th April 2012.   Renowned Organiser, Paddy O’Brien was very impressed with Loretta’s rendition of this wonderful song and recalled how with his Aubane roots, fondly remembered attending Cullen Feis as a young person.    Paddy began the Over-60s Competition in 1977 and some years ago was chosen as the Cork Person of the Year for having developed this hugely popular annual event to the very impressive level which it has now successfully reached.    Having won the North Cork Section of this year’s Competition Loretta is guaranteed the full support of Millstreet Parish as she participates in the Semi-Final in Cork on 15th April.    She was given a splendidly warm reception when she brought the winning cup to the Canon O’Donovan Centre this week.    Sincere Congratulations, Loretta and every success in the Semi-Final.  (S.R.)

Here we share a selection of images from the enormous amount of preparations necessary for such a very successful production.   We note the magnificent costumes.   We see the ultra-modern new lighting system and END_OF_DOCUMENT_TOKEN_TO_BE_REPLACED

Just a reminder that the monthly Gramophone Circle get-together takes place tonight (Friday) at 8.15 p.m. in the Canon O’Donovan Centre, Clara Road.   The Presenter is Margaret Moynihan, Killarney Road, Millstreet.   All are very welcome to attend and to enjoy a selection of splendid musical choices played on disc.   (S.R.)

Just noted that this week marks Programme 198 on LTV2 Millstreet …. and this week also marks Eily’s Buckley’s Regional News No. 1098….Just a zero of a difference!  (S.R.)

LTV’s Dan Joe Kelleher recorded Mass in Rathmore last night marking the 25th Anniversary of the Rathmore Pantomime presented annually by the Marian Players.   That Mass is scheduled to be broadcast this Sunday evening at 5.30 on LTV.  This will not be available online but can be received live on Channel 48 UHF and on Channel 12 VHF (from our Mushera signal).  Dan Joe broadcasts Mass from various Muskerry and Duhallow locations on the Sunday Evening Specials.  (S.R.)