Next Friday night, 2nd March @ 8pm in The Town Park

Come and support your local team !

See all the Millstreet results and fixtures for the week 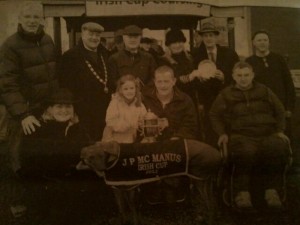 Congratulations is due to Dan O’Donoghue, Lackabawn, Millstreet on his recent achievement of winning the Irish Coursing Club’s “Coursing Fantasy Competition.” This All-Ireland competition requires greyhound enthuasiasts to choose eight greyhounds from a list of hundreds at the start of the coursing season. The dogs earn points throughout the year and the individual with the most points at the end of the season is deemed the winner of the €5,000 prize. Dan, renouned far and wide for his knowledge of coursing greyhounds, held a narrow lead going into the final event of the season, the JP McManus Irish Cup last weekend. After a couple of close buckles and plenty of drama at the Limerick event, Dan was crowned winner on Sunday afternoon following the success of Jeru Cavendish in the END_OF_DOCUMENT_TOKEN_TO_BE_REPLACED