The General Public are very Welcome to come along to the Start of the Tractor Run which will take place Tomorrow Sunday at The Wallis Arms Hotel to have a look close up at the Tractors before they leave the Hotel at 12.30pm and you can call in for a Cup of Tea and a Chat as well if you wish from 11 am onwards,any Support would be very much appreciated for both the Millstreet Museum and Millstreet Website.

Millstreet Vintage Club are holding a Tractor Run on Tomorrow Sunday May 8th Starting and Finishing in Millstreet Town,a Scenic Route is Planned to go in a direction West of the Town,the Run is in Aid of both Millstreet Museum and The Millstreet Website which are two very important Services to both the Millstreet Locality and the Wider Surrounding Area.

Sign On for The Tractor Run will be at the Wallis Arms Hotel Millstreet from 11am with Take Off at 12.30pm,Entry Fee is €20 and all Tractors are very Welcome,There will be a Perpetual Trophy for the Best Vintage Tractor on the day and your Support would be very Welcome,for Details Contact Dan O’Riordan on 087 2452569 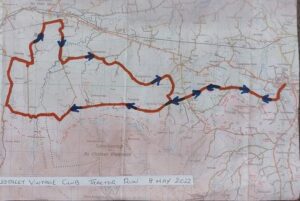 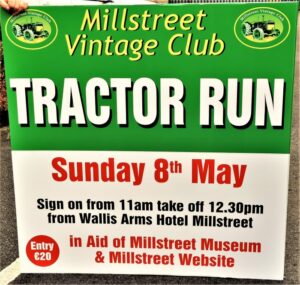 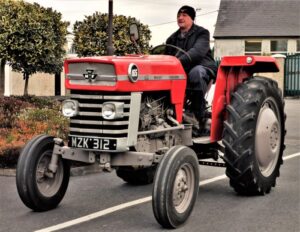 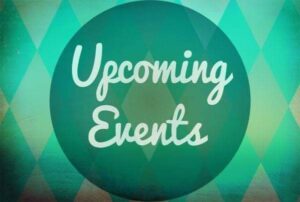 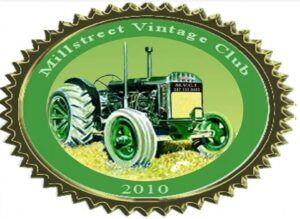 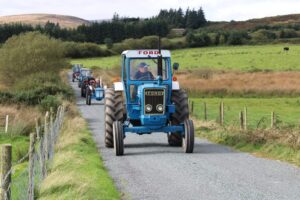 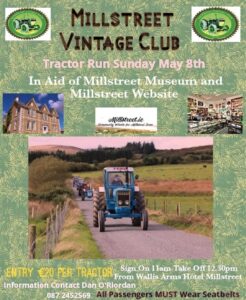 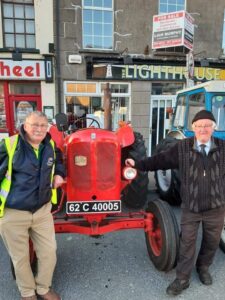 I was wondering if someone might please be able to help me?

My name is Helen Sagan and I live in Australia. I understand it is not your job to do family history research for anyone who might happen to ask, but I am looking for some very specific local history information regarding the Rockite movement of 1822 and I thought you might best be able to assist or direct me.

I am researching my husbands Walsh family tree, on the Kerry side of the Blackwater, in-fact I visited your library back in 2011 and spent many pleasant hours looking through the Casey Collection.

At present I am investigating two brothers Healy, Tadj(Timothy?) and Liam(William?) that were executed on 10th August 1822 (along with 3 others) and have their names inscribed upon a monument erected at Shinnagh Cross, Rathmore. I believe these brothers to be my husband’s  Uncles and would sincerely love more information on them. 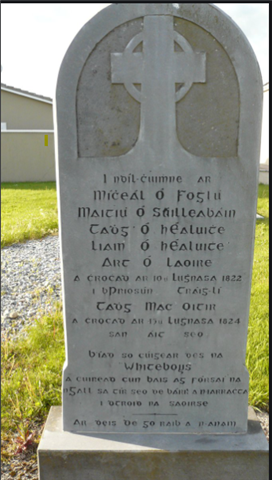 Most recently I discovered the Duchas School books (a truly marvellous & enlightening collection!) which introduced me to tales of old local people during the 1930’s, recalling stories their grandparents would have told them, some about the Whiteboy uprising and precisely the 1822 murder of William Brereton and the subsequent events that resulted in and around Rathmore.

END_OF_DOCUMENT_TOKEN_TO_BE_REPLACED 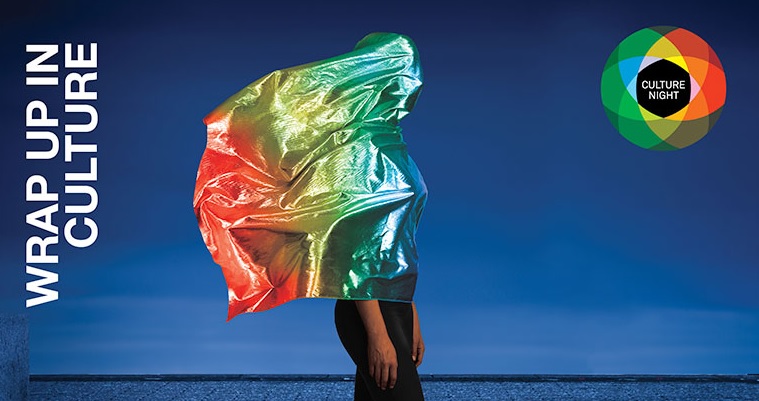 END_OF_DOCUMENT_TOKEN_TO_BE_REPLACED

LTV2 Millstreet Programme No 265 is now Online enjoy the Programme 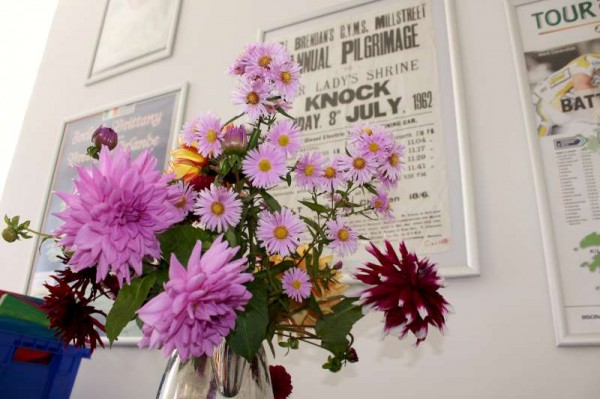 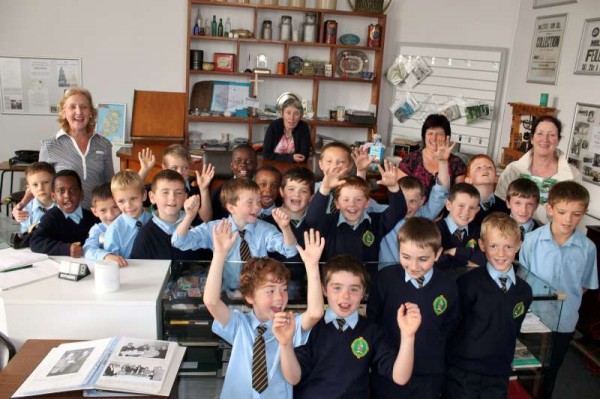 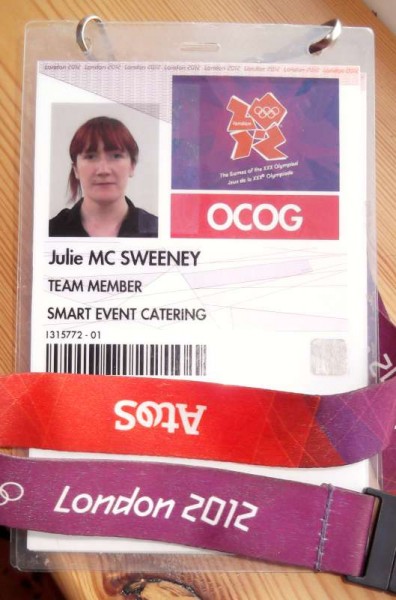 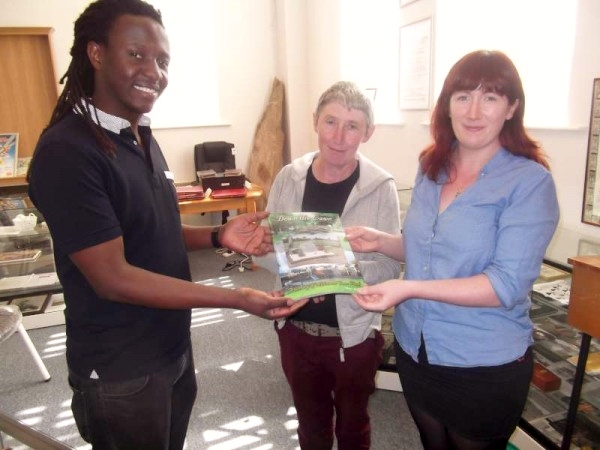 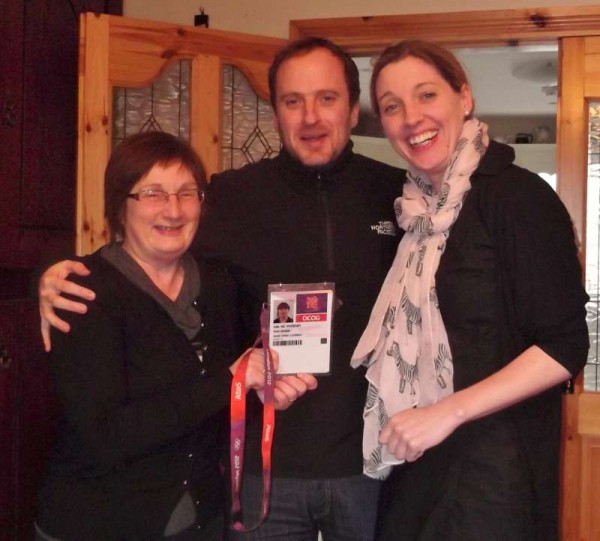 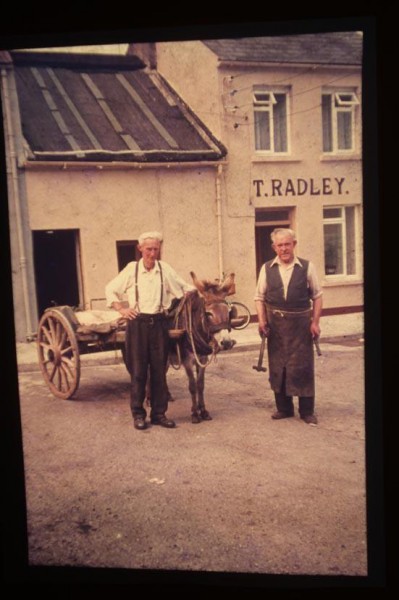 The photo of Tom & Jack outside the forge, with the audio was stumbled upon recently, when they were put online by historian John Tierney. We’d like to thank the Radley family for END_OF_DOCUMENT_TOKEN_TO_BE_REPLACED

The hotel boasts that it can arrange Car Hire – Messages and Telegrams – Newspapers and Packed Lunches.

The Wallis Arms remained much the same until about ten years ago when the Sheehan family took over the ownership of the hotel.

A copy of the booklet is already in the archives of Millstreet Museum.

And here we follow the moments in a series of images before we reveal what was contained in the neatly presented package which had arrived from Exeter, Devon, England having been purchased on eBay by Bob Emprimo having observed Michael Cashman’s alert on the Millstreet website that such a toy doll appeared on eBay.   A million thanks to Bob for never forgetting Millstreet and for END_OF_DOCUMENT_TOKEN_TO_BE_REPLACED 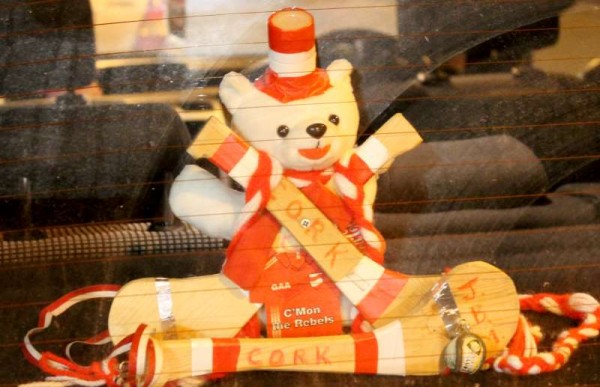 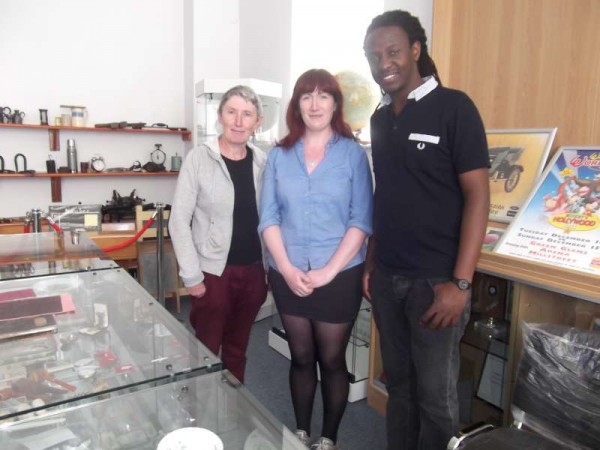 Maurice Buckley writes:  “The man in the photograph is likely to be Agustus Andreae the owner of the shop and some of his daughters.
Agustus inherited the shop from his mother (a widow) after she died 31/03/1858.

Agustus married Catherine Dennehy (a shop assistant from Millstreet in 1880) and they  had 5 daughters, and a son:

The girls were known, as far as I know, as Margaret, Bridget, Sophie, May,and Elsie.   None of them married.

The original Andreaes who came to Millstreet were 2 brothers – William and Augusta.   Both were German Lutherans. They came around middle to late 1830s.   William was married to Margaret Browne said to be from the Castleisland area they were married in London in 1835.

The other brother Augusta never married and served in the local church of St. Anna’s (in Pound Hill) as Church Warden 1860-1875.

Together they started a bakery etc. and it appears business grew from there.   William died in 1844 aged 36 and is buried in St. Patrick’s Cemetery as he became Catholic after the birth of their first child.

Augusta died in 1884 and is buried in St. Anna’s Cemetery in Pound Hill, Millstreet.”

Epitath on headstone in St.Patrick’s Church Cemetery: “Erected in memory of Augustus Andreae who died 28th march 1894 aged 52 years. Also his beloved child William aged 6 months and to his young mother Margaret Andreae who died 31st May 1858 age 49 years”. The grave is at the very back corner behind the sacrastry (full details on HistoricGraves.com)

Agustus Andreae died on March 28th 1894. Here is his probate:

Andreae Agustus
Effects £2,494 9s 4d
The Will of Agustus Andreae late of Millstreet County Cork Shopkeeper who died 28 March 1894 at same place was proved at Cork by James Dennehy of Millstreet N.S. Teacher and William Quinlan of Newmarket Shopkeeper both in said County two of the Executors.

Mary Andreae was probably the last of the family in Millstreet. She died in 1970 at Main St, Millstreet : 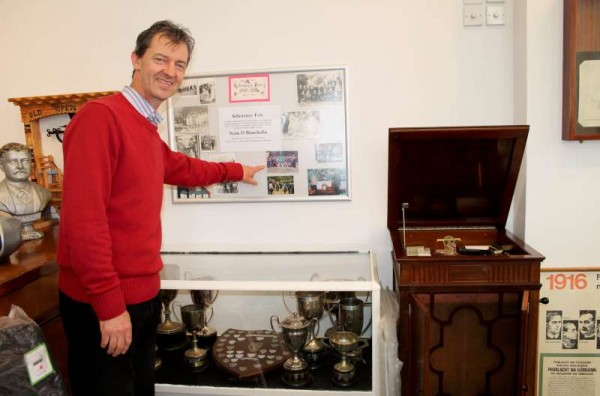 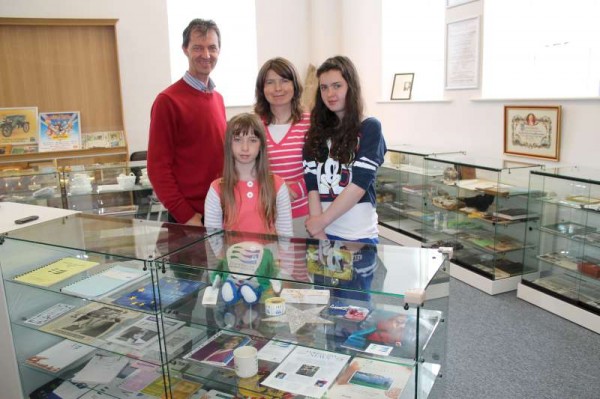 Although not fully ready for the official opening of Millstreet Museum & Tourist Information Centre as further signage and wall units have as yet to be completed we shall be opening to the public from Wednesday.   Our annual Church Gate Collection takes place this coming weekend – 10th and 11th August 2013 – in Millstreet.   Restoration work has been very costly and this Annual Collection is our main source of funding.   We very much appreciate the kind support of everyone.   (S.R.)

We also came across some other historical photos from Millstreet, some of which we had not seen before, on the Irish Historical Picture Company website. Seán Radley informed us that this shop used to be open in Dublin, and over the years he has purchased most of the photos for the Millstreet Museum collection.

Millstreet Museum & Tourist Information Centre will open on a temporary basis to coincide with Millstreet Gathering Festival.    The Centre is presently being prepared for its official opening later in the Summer but we welcome visitors to view the work-in-progress this Thursday, Friday and Saturday (4th, 5th and 6th July 2013).  Opening Hours on the three days are from 10.00 a.m. to 2.00 p.m..      (S.R.)