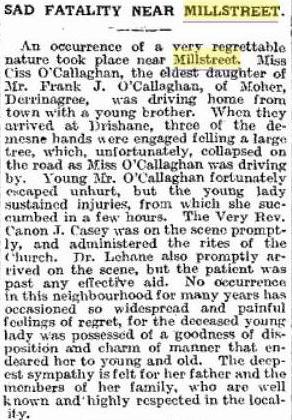 Read the inquest and more below:

An occurrence of a very regrettable nature took place near Millstreet. Miss Ciss O’Callaghan, the eldest daughter of Mr.Frank J. O’Callaghan, of Moher, Derrinagree, was driving home from town with a young brother. When they arrived at Drishane, three of the demese hands were engaged felling a large tree, which unfortunately collapsed on the road as Miss O’Callaghan was driving by. Young Mr O’Callaghan fortunately escaped unhurt, but the young lady sustained injuries, from which she suvvumed in a few hours. The Very Rev. Canon J.Casey was on the scene promptly, and administered the rites of the Church. Dr. Lehane also promptly arrived on the scene, but the patient was past any effective aid. No occurrence in this neighbourhood for many years has occasioned so widespread and painful feelings of regret for the deceased young lady was possessed  of a goodness of disposition and charm of manner that endeared her to young and old. The deepest sympathy is felt for her father and the menber of her gamily, who are well know and highly respected in the locality.

Mr Coroner James Byrne, J.P., held an inquest at
the Courthouse, Millstreet, on Monday on
Norah O’Callaghan, aged about 21 years, who
died from injuries caused by the falling of a
tree at Drishane, on Friday, the 27th inst. Mr
J.S. O’Connor assisted the Coroner in the
taking of the depositions.

ACKNOWLEDGEMENT.
Mr and MRS F.J. O’Callaghan and
family, Moher, Millstreet beg to offer their
sincere and grateful thanks to the many kind
friends who so thoughtgully sent them messages
of sympathy on the death of their daughter,
and they hope that their friends will be kind
enough to accept this acknowledegment, as it
would be impossible to reply to each individually.

They had of 17 children in the family, of whom 12 survived.

Hanora (Nora) O’Callaghan was born on October 8th 1895 at Moher.

Francis who was driving the car was born on October 23rd 1899, meaning he have been about 17 at the time of the accident.