The current premesis of the AIB in Millstreet, but where was it located in 1916? 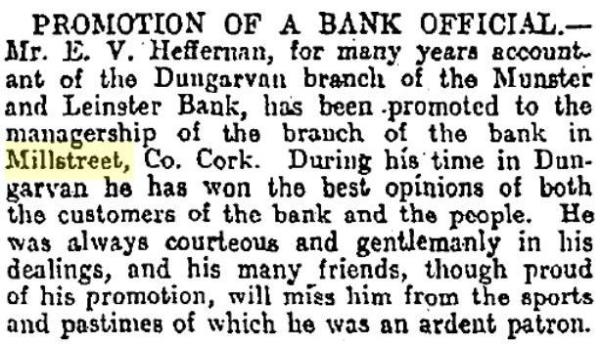 PROMOTION OF A BANK OFFICIAL. – Mr. E.V. Heffernan, for many years accountant of the Dungarvan branch of the Munster and Leinster Bank, has been promoted to the managership of the branch of the bank in Millstreet, Co.Cork. During his time in Dungarvan he has won the best opinions of both the customers of the bank and the people. He was always courteous and gentlemanly in his dealings, and his many friends, though proud of his promotino, will miss him from the sports and pastimes of which he was an ardent patron.

1921: E.V. Heffernan had moved to Kenmare as Bank Manager and Wm.McSweeney had become the Manager in Millstreet. [ref]

June 1922: Bank Official Entertained Mr Mackey, M. and L. Bank: was entertained to supper at Millstreet, prior to his trasfer on promotion to Nenagh. [ref]

Only a few years later in 1919 Mr Heffernan and two of his clerks were robbed in the famous Millstreet Bank Robbery:

“In the course of a half hour or so, Mr E V Heffernan, Manager, and two of his clerks came along in a motor driven bv Mr P Carmody. The car on which the National Bank officials drove had been placed across the road as an obstruction, and on seeing this Mr Carmody pulled up. Both he and Mr Heffernan were at once covered, and on Mr. Heffernan refusing to hand over the cash he was struck  with a revolver over the eye, and disabled for the time being, but the wound is not considered to be serious. Messrs Heffernan and Carmody were then seized, blindfolded and…” [full details]