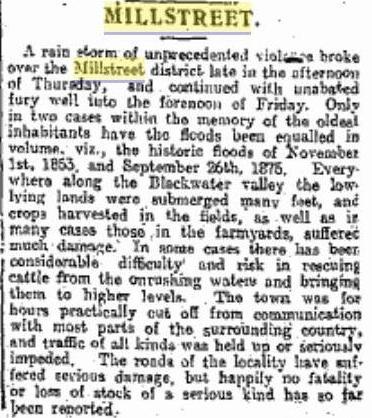 A rain storm of unpreedented violence broke
over the Millstreet district late in the afternoon
of Thursday, and continued with unabated
fury well into the forenoon of Friday. Only
in two cases within the memory of the oldest
inhabitants have the floods been equalled in
volume, viz, the historic floods of November
1st 1853, and September 26th 1875. Every-
where along the Blackwater valley the low-
lying lands ahve submerged many feet, and
crops harvested in the fields, as well as in
many cases those in the farmyards, suffered
considerable difficulty and risk in rescuing
cattle from the onrushing waters and bringing
them to higher levels. The town was for
hours practically cut off from communication
with most parts of the surrounding country,
and traffic of all kinds was held up or seriously
impeded. The roads of the locality have suf-
fered serious damage, but happily no fatality
or loss of stock of a serious kind has so far
been reported.

The newspaper article is from Monday 20th November 1916,
and the rain storm happened on Thursday 16th November