Mary (née Callanan) “Kitty” McCoy, beloved wife of the late James McCoy, devoted mother to Mary, doting grandmother to Brianna, passed away peacefully on November 18, 2016. Formerly of the Bronx, her last 17 yrs were as a resident of Cortlandt Manor. She was born on March 23, 1925 to Hannah (nee Hickey) and John Callanan in Blarney, residing at Tullig, Millstreet, Co. Cork, Ireland. She was predeceased by her brother Sean, and survived by her sister Joan Gleason of Pompton Lakes, NJ and many nieces, nephews and cousins, here and in Ireland.
She was a dedicated homemaker, an avid gardener and voracious reader, who nurtured her family until her infirmities overcame her. She had an impact on all those who met her, and will be greatly missed by all as we forever carry her loving memory in our hearts.
Visiting hours will be on Monday, November 21st from 2-4 & 7-9 PM at HERITAGE FUNERAL HOME, Morrissey Drive, Putnam Valley. A Mass of Christian Burial will be offered at 10am on Tuesday at the Church of the North American Martyrs and interment will follow at Rose Hills Cemetery. [f] 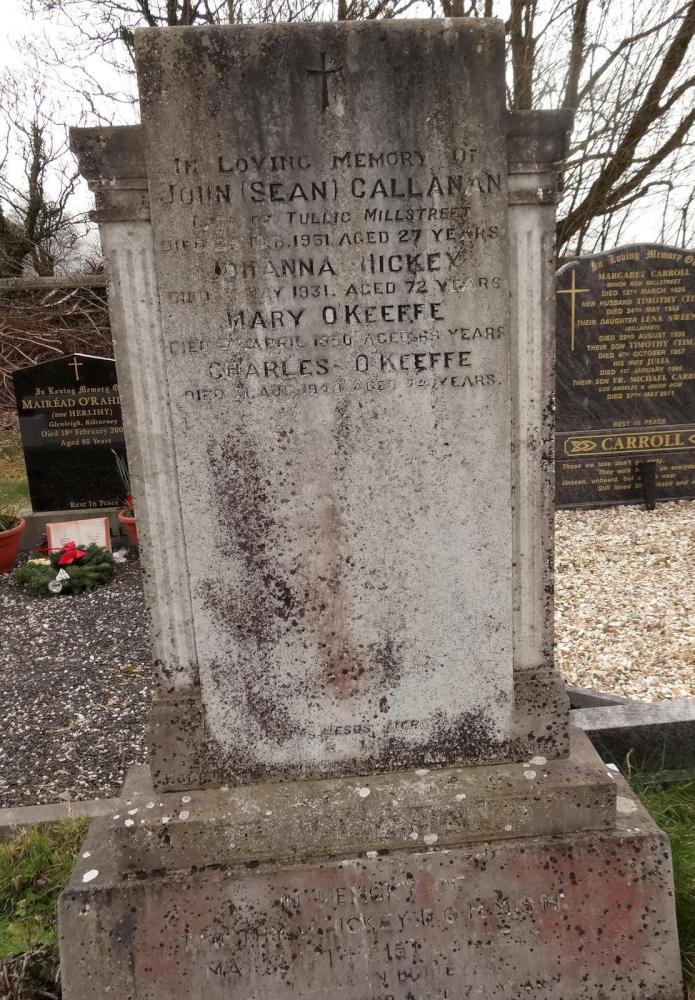 The Callanan family grave is in Drishane [HistoricGraves.com]. It reads:

In Loving Memory of

In Memory Of
TIMOTHY W. HICKEY D.G.M.M.S.M.
MAJOR 17th/21st LANCERS
of Kilcolman, Buttevant
Died 20th June 1969 aged 79 Years
After a full and useful life in the service
of others for ever with the Lord

Listed on the headstone:

TODO: centralise the notes on the Hickey Family in one post, and reference the family from there

The family lived at Tullig / Altamount. After Seán died, the Golden family who were living in Altamount Lodge (where the entrance to Dr Casey’s is now) purchased the house and still live in the house.

In 1938, as a young lad of about 14, John Callanan wrote a piece on the Mass Rock at Tullig (Clais an Aifrinn) for the Schools Folklore Collection. Read it here.