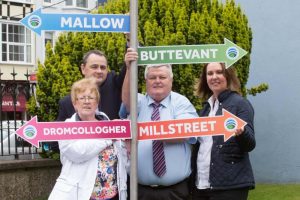 All four credit unions, which combined have seven branch offices (Buttevant, Doneraile, Dromcollogher, Broadford, Mallow, Ballydaheen, and Millstreet) have been in discussion about the possibility of a coming together over the last year. As talks have progressed, each credit union undertook a strict examination of each other’s finances, governance, procedures and policies, and satisfied themselves as to the strengths and merits of this merger. The coming together of these four credit unions, known as a ‘Transfer of Engagements’ under the transferee, Mallow Credit Union, will result in a stronger and more vibrant credit union with increased membership.

Following the merger, the total asset size will be €147 million with a greatly increased common bond servicing over 28,000 members, making it one of the 20 largest credit unions in the country. Savings will be €125 million with a combined loan book of €32 million, with income flows ensuring that the group will be well reserved and funded going forward.

The advantages of the ‘Transfer of Engagements’ will be a stronger and more robust credit union, with savings and loan products at more competitive and sustainable rates, increased and better services and shared cost efficiencies with a larger geographic common bond and enhanced growth opportunities.

Speaking on behalf of the amalgamated credit union, Tomás O’Neill, CEO of Mallow Credit Union said, “We are very excited about this collaboration and the potential it presents to us as a group, to grow and develop for our community, and to ensure all our members retain a credit union presence within their local community, where seven branch offices will service their financial needs. I am confident that the decision to join forces with the neighbouring credit unions will help us to continue to provide enhanced services to all our members, now and into the future.”

Members’ savings and loan accounts will be unaffected by this merger and there will be little physical change to their own branch. Where the changes will occur will be with the installation of a new computer system which will deliver full online banking and the ability to transfer funds by EFT. In addition the new entity will also be part of a group awaiting approval from the Central Bank for the introduction of a debit card. By coming together, their combined strength and increased membership will ensure that they have the critical mass to successfully develop and introduce new services, offering a viable alternative to traditional banks while at the same time maintaining the credit union ethos.

Mr O’Neill continued “With regulatory requirements becoming more stringent, larger credit unions have the ability to grow and offer stability and security to members whose requirements are evolving on a constant basis. The proposed transfer arises from the belief of the Boards of Directors of the four credit unions that our members can be better served together, and we consider it an ideal opportunity to grow and develop our services to members in their local communities.”

He concluded “All four credit unions look forward to serving our members as a stronger entity. Over the past number of weeks we have been working closely to ensure that all operations are aligned to provide a seamless integration for all members. We are now ideally positioned to focus on innovations that will enhance the overall member experience, and we are confident that the future will be very bright for our enlarged credit union and its current and future members.”

The Boards of all four credit unions involved expect the legal requirements relating to the ‘Transfer of Engagements’ to be completed in the coming weeks. In the meantime, each of the four credit unions will continue to operate as normal. Joining is easy and you’ll be in good company with 2.9 million others who have already recognised the benefits of credit union membership in Ireland.

For more information on the merger or becoming a member, just drop into your nearest branch office, or visit mallowcu.ie.