A letter from Richard Thomas Pomeroy to Robert Chalmers, Under-Secretary to Ireland, requesting an extra six constables in Millstreet in order to keep the peace in the aftermath of Easter 1916: 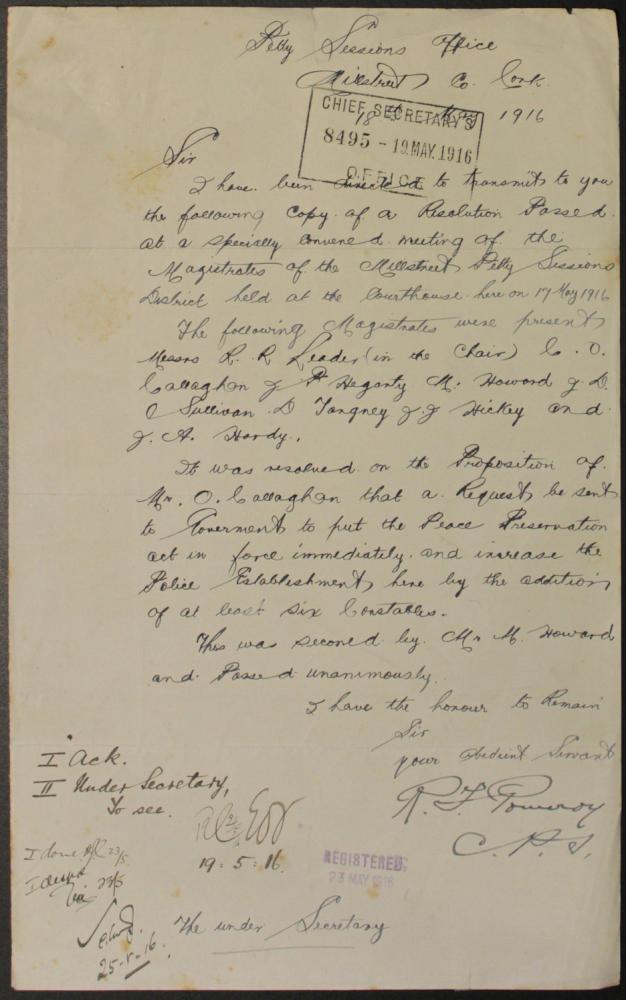 It was resolved on the Proposition of Mr. O. Callaghan that a Request be sent to Government to put the Peace Preservation Act in force immediately and increase the Police Establishment here by the addition of at least six Constables.

This was seconded by Mr M Howard and Passed unanimously.
I have the honour to remain
Sir
your obedient Servant

This is a letter from Richard Thomas Pomeroy (1858-1937), member of the Petty Sessions Office on MillStreet District Cork, to Robert Chalmers (1858-1938), the under-secretary to Ireland. Robert Chalmers assumed the role in 1916 for a brief period following the resignation of Matthew Nathan (1862-1939), after accepting political failure during the 1916 Easter Rising. The letter claims to transmit a resolution made by the magistrates of the MillStreet petty session district on 17 May 1916. The resolution regards the events of the Easter Rising, stating that the board has resolved to suggest to the government that the Peace Preservation Act should be enforced, along with more policing. Pomeroy names man who attended the meeting, including James J. Hickey (b.1876) and Joseph Alexander Hardy (b.1862).