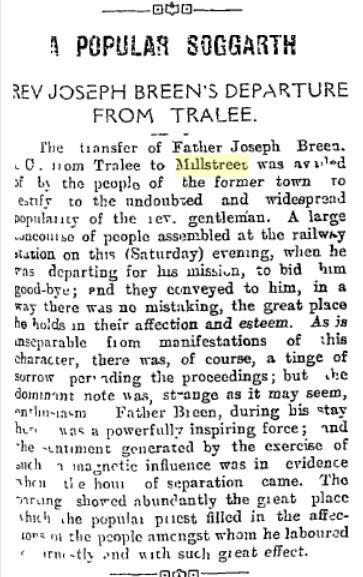 The transfer of Father Joseph Breen C.C from Tralee to Millstreet was a??ded of by the people of the former town to testify to the undoubted and widespread popilarity of the Rev. gentleman. A large concourse of people assembled at the railway station on this (Saturday) evening, when he was departing for his mission, to bid him good-bye; and they conveyed to him, in a way there was no mistaking, the great place he holds in their affection and esteem. As is inseperable from manifestations of this character, there was, of course, a tinge of sorrow persuading the proceedingsl but the dominant note was, strange as it may seem, ??????? Father Breen, during his stay here was a powerfully inspiring farcel and the sentiment generated by the exercise of such a magnetic influence was inevidence when the hour of separation came. The ??ang showed abundantly the great place which the popular priest filled in the affections the people amongst whom he laboured ???rm?stly and with such great effect. – from the Kerryman 20th May 1916

Fr Breen was the chaplin at Drishane. He was heavily involved in the troubles and had to go into hiding (in a basement in Drishane Castle) for some time so as not to be killed. We have bits and pieces on his activities in this article from 2015