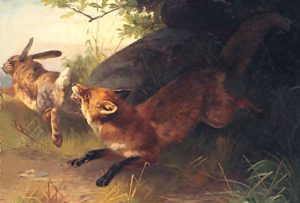 Out of the rushes he did race
The angry fox was quick to chase
He ran the field up to the gate
Where the hidden vixen lay in wait.

The vicious vixen dived to kill
But missed the prey and took a spill
The vixen in a coat of mud
Chased with the fox thirsting for blood.

At Blackthorn bridge the hare turned right
He had travelled this way every night
His little heart began to pound
The foxes they were gaining ground.

The foxes quite a speedy pair
Drew level with the dodging hare
They thought the hare was going to yield
That they would kill him in this field.

But little did the foxes know
That two months short of a year ago
In coursing meetings throughout the Land
This hare had left fleet greyhounds stand.

A poacher caught him with a dazzler light
On a wild and dark october night
He blindly ran into the poacher’s net
That night he never will forget.

The awful feeling of shock and fear
When the poacher seized him by the ears
Then put him in a brown cord sack
And carried him off on his back.

For him ten quid the poacher got
And to a poacher ten quid is a lot
He sold him to a Coursing Club
And drank the money in a pub.

He never ever could forget
The way he dodged and cheated death
The way he gave the hounds the slip
Their mouths wide open for to rip.

Those bitter nights so cold and dark
He spent in unsheltered Coursing Parks
With not much to eat and in poor shape
In a little plot called ‘the escape’.

From the escape he heard his comrades die
He listened to their painfull cry
He listened with a throbbing heart
As the hounds they tore his friends apart.

The human faces all about
The way they used to cheer and shout
The judge upon a noble steed
Instilled in him great fear indeed.

The Coursing Season it was done
His well earned freedom he had won
They set him free in Blackthorn Dell
Since then he knew this country well.

He love the open Blackthorn range
The grassy fields of Kingston Grange
The sallies down by Hawthorn inn
The bushes in the furzy glen.

And better to be chased by foxes
Than in Coursing Meetings in small boxes
Waiting with a throbbing heart
For the hounds to tear your bones apart.

Again he faced a vital test
And to live he had to run his best
He could see the foxes razor teeth
Their mouths wide open for to eat.

His little legs began to tire
But the will to live it did inspire
He used his great side stepping skill
Each time the foxes closed to kill.

The vixen she began to flag
She galloped like a jaded nag
Her body ached her bones did rack
She quit the chase and turned back.

With weary legs and spirits dropping
The tiring fox he felt like stopping
On him the rapid pace did tell
As on they raced through blackthorn dell.

The gallant hare felt weary too
His little body felt like glue
He could even feel the fox’s breath
But still he slipped away from death.

Blackthorn hill rose high and steep
The rapid pace slowed to a creep
The uphill journey it was tough
The dog fox stopped he’d had enough.

His race for life the hare had won
The fox and vixen he’d outrun
He had ran four miles at his outright best
And he took a badly needed rest.

… To return to the situation in Duhallow, the question immediately arises: who exactly are our current local writers, the equivalents of the ‘mute inglorious Milton’ in Gray’s Elegy? There is one obvious candidate who should be better known, Francis Duggan of Claraghatlea, west of Millstreet. In the 1970s he published a series of chapbooks of poems, notably Rhymes of a Labourer and Ballads of a Plebeian, full of marvellous poems, sold at Mary Cronin’s in Millstreet. One of the best – too long to quote at length here – is ‘The Blackthorn Hare’, worthy of mention in the same breath as Scott’s ‘Stag at eve’. In its 108 lines it recounts the escape of a mountain hare from a pair of foxes, attributable to a season’s practice at
escaping from the hounds at coursing meetings.

The poem wonderfully describes the extraordinary mixture of cruelty and excitement at those events:

The human faces all about,
The way they used to cheer and shout.
The judge upon a noble steed
Instilled in him great fear indeed.
The excitement of the fox-chase is irresistible:
The hare raced on through Kingston Grange,
On through the open Blackthorn range,
Then crossed the little bluebell rill
And headed on towards Blackthorn hill.

Duggan has lived for many years in Australia from where he has published a late chapbook of the same kind, full of evocative poems of nostalgia and exile (the Portuguese saudade), as in the book’s masterpiece: I left Duhallow but Duhallow followed. These poems in their way are as distinguished as the celebrated polka compositions of the
great fiddlers. The fate of Francis Duggan brings to mind Séamus Ó Cróinin’s introduction to his superbly scholarly modern edition in 1984 of Seán Ó Cadhla’s 1932 volume of the
poems of Dónal Ó Conchúir of Cnoch Dubh, my own townland in Cullen parish: ‘nior fhaca an file bocht an leabhar i gcló’. Francis Duggan did see his poems edited, but only because
he did it himself. He deserves a masterly editor, as Dónal Ó Conchúir found. And it would be appropriate if he found that editor non-posthumously….

1 thought on “The Blackthorn Hare”