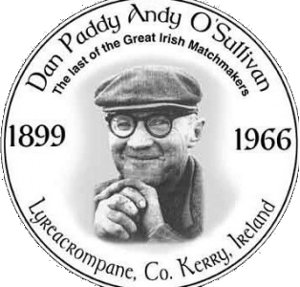 Hi, I have recently met a man who lives in Killarney originally from Lyrecompane North Kerry. He knew the character Dan Paddy Andy personally, and on hearing that I came from the north Cork area, he told me a story about a woman who came from somewhere around Kanturk/Millstreet who drove to Dan Paddy Andy’s house in Lyrecompane and recorded his voice on an old reel and spool tape machine.
He says that as far as anyone knows, this is the only recording of Dan Paddy Andy that exists, and though efforts have been made by some to trace the lady in question, she has not been found.
I know that this is a longshot, but I just wondered if anyone interested in local history has ever heard of such a recording?
Any information would be very gratefully received by an elderly man who would dearly like to know!

Many thanks for your time and consideration
Best Regards, Kathleen Regan (Buckley)  <email>

—–
[added by the admin]: I can only describe the following as “TV gold”, in 1968 Bill O’Herlihy interviewed John B Keane, and they spoke about matchmaking, “Dan Paddy Andy” the last of the matchmakers, and the problems of single men in Kerry. Watch it on the RTÉ Archives here.

2 thoughts on “Help: Looking for a Recording of Dan Paddy Andy”