Cork-based archaeologist Enda O’Flahety documents what remains of the desolate buildings in a photography project aimed at capturing the long decline of rural Ireland.

O’Flaherty began the project last year after coming upon an abandoned schoolhouse during a work field trip and realising that few modern visual records of such buildings exist.

Recently he featured the old Cloghoula National School. There is a good description of the architectural features of the school, as well as a number of photos. The article can be seen here (or just click on the photo below) 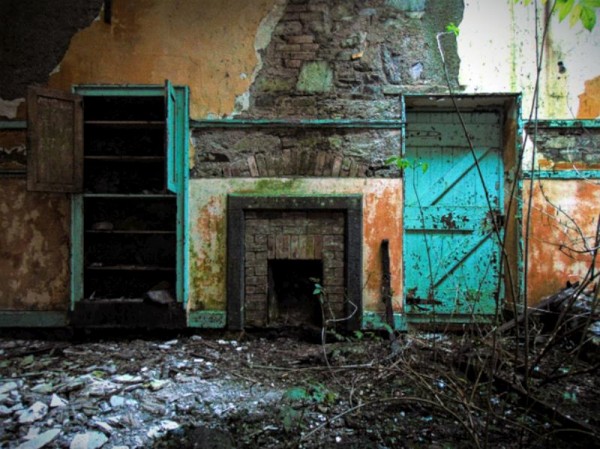 The school dates from   (and not 1868 as described in the article). Not sure of when it was decommissioned, but by 1950 it was being used as a petrol station.

[Note: Enda states below that the the school was not in the 1840s OSI map … he is correct so maybe 1902  was referring to a different school in Cloghoula … 1802 reference comes from Noel Buckley in the Corkman]

It is currently for sale for a price of €14,000. [see daft.ie]. Planning restrictions and cleanup of the petrol station site may have something to do with the price being so low :-(.

In 2012, it was described as an eyesore by Cllr. Noel Buckley, and should be delisted [#ref the Corkman]

Seen from the air on Google Maps

2018: School’s out: One man visited 240 abandoned Irish schools on camera with striking results – Enda released his book – Deserted Schoolhouses of Ireland is published by Collins Press (€24.99)

Teacher Jim Dennehy known as ‘Jim the Dancer’ taught in Cloghuola N.S. around 1916 [1], and probably for 20 years before that also.

Marriage of James Dennehy and Ellen Buckley on July 31st 1898 at St. Peter & Paul’s Church in Cork,  by James J Burke C C; He a teacher from Millstreet, son of Daniel Dennehy, a farmer; She from Keam, daughter of Timothy Buckley a farmer.; In the presence of William J Hegarty and ????

1901 census – James is 37 and Ellen 31. Living with Ellie’s parents and sister. at Caherdowney. States that James was born in Co. Kerry.

Does anyone have any more information on him?
[ancestry: James Dennehy]
[ancestry: Ellie Buckley]

This poem is about him:
Jim the dance
will go to France
and poor Martin will be wailing
and the bloody old fool
will lose his school
on account of
An dtuigeann tú Gaelinn?

1 thought on “Inside the old Cloghoula National School”